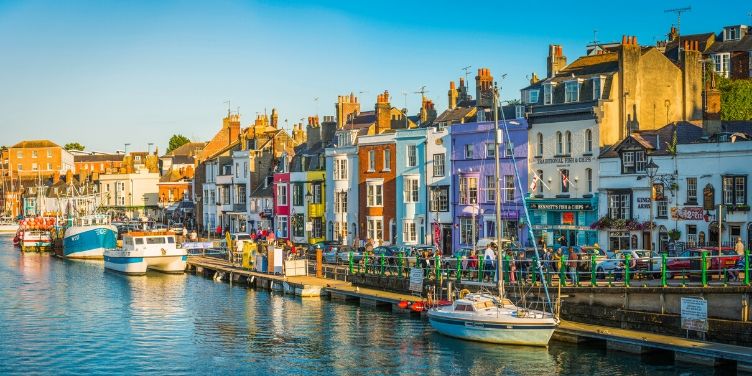 A golden sandy beach circling a wide, serene bay, Weymouth Beach has been attracting tourists since King George III first took to the waters here for his health.

The bay is fronted by a terrace of attractive Georgian buildings, the harbour is lined with colourful buildings and fish ‘n’ chip shops, and the town has plenty of traditional seaside attractions on offer.

Weymouth’s single biggest draw is its gorgeous beach, which is consistently voted one of the best in the country.

The golden sands are the perfect place to unwind, and the calm waters of the bay are ideal for swimming – especially for families with young children.

There are also donkey rides, swing boats, and one of the last remaining seaside Punch and Judy shows in the country.

This is British seaside holidaying at its best.

As a born-and-bred Weymouth local, I may be slightly biased.

But I really do think that Weymouth has some of the best fish ‘n’ chip shops in England! For the best of the best, head to the harbour for a just-caught fish supper that’s as fresh as can be. Two local favourites are Fish ‘n’ Fritz (my personal choice) and the Marlboro. Both are right by the harbour, so you can grab your chips to go and eat them while watching the boats come in and out.

A coastal town with a long fishing history, it’s no surprise that Weymouth is home to some amazing seafood.

Locals love the Crab Shack on Chesil Beach, and Billy Winters in Portland Harbour. Or visit during the Dorset Seafood Festival in July for a taste of all the very best local seafood. 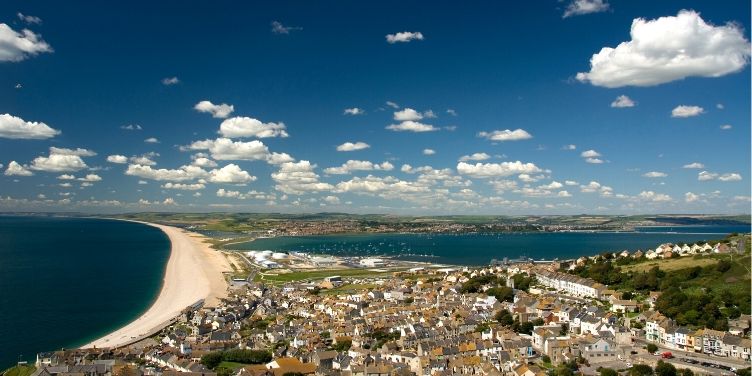 Small towns aren’t often associated with history, but since it was first founded in the 12th century Weymouth has seen a lot of action.

The harbour is one of the ports that played a role in the Spanish Armada, and is also where the Black Plague entered England in 1348. There are plenty more interesting historical stories to learn about Weymouth.

Head to Weymouth Museum inside the antique Victorian brewery at Brewer’s Quay to find out more.

Weymouth was a key port during many British wars.

During the Second World War, for example, Weymouth was one of the launching places for the boats involved in the D-Day landings. You can spot Weymouth harbour several times in the recent movie Dunkirk.

The Nothe Fort is a charming volunteer-run museum in a Victorian fort, where you can discover many exhibits about the different wars the town has played a part in.

Neighbouring Weymouth, the Isle of Portland is attached to the mainland by an 18 mile long beach. Chesil Beach is an interesting geographical feature and also the setting of an upcoming movie based on Ian McEwan’s book of the same name, On Chesil Beach.

Portland itself is a pretty, rugged location home to several abandoned quarries once used to gather Portland Limestone – from which St Paul’s Cathedral was built, among other important buildings.

The wild coastline around Portland Bill is a great place for a walk, or you can climb Portland Bill Lighthouse for some amazing views along the coast.

Lying on Dorset’s historic Jurassic Coast, Weymouth is surrounded by beautiful natural sights and many are within easy daytrip distance.

From the famous Durdle Door on the coast, to the rolling Wessex downs to the north, there is plenty to discover.

Nearby Thorncombe Woods are a lovely spot for a Sunday stroll, or west along the coast you’ll find The Fleet. This latter is a brackish water lagoon lying between Chesil Beach and the mainland, once used by smugglers and today a quiet, picturesque area that’s perfect for a walk.