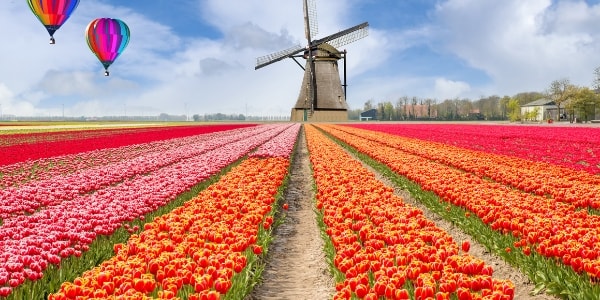 Spring is a great time of year to explore the best that gardens have to offer in Europe. Perhaps it’s the early flowering plants beginning to show their nascent green shoots that urge me to visit gardens, both at home and abroad.

Here are seven gardens I would recommend visiting in Europe. They cover a wide range of gardening styles from the many thousands there are to visit.

One of the best and most colourful spring gardens to visit, Keukenhof, is a show garden for the bulb growers of Holland. As a result, it’s only open for eight weeks from mid-March. The site is filled with flower beds crammed with tulips in all their multicoloured glory, narcissi and hyacinths along with other spring flowering bulbs.

Keukenhof is set in the middle of the bulbfield district and is surrounded by a patchwork of multi-coloured fields. There are several windmills dotted around the landscape, perfect for that quintessential Dutch scene of tulips and windmills.

The Alhambra Palace is one of the greatest examples of Moorish architecture in Europe. Attached to the palaces is the Generalife Gardens. The gardens are a fine example of the Islamic idea of representing paradise, which means the inclusion of water features.

Full of rills, fountains and ponds, the gardens of the Generalife are still a tranquil place to be, despite the tourist crowds. In addition to all of the features, there are gardens full of perfumed flowers. Bougainvillaea and wisteria decorate the walls while roses and other flowering plants adorn the gardens in secluded courtyards.

To avoid disappointment, tickets must be booked online in advance as numbers are limited each day. Visit in early summer for the best experience!

The Impressionist artist Claude Monet claimed his greatest creation was his garden in the village of Giverny. His gardens are best known for the lily ponds which often feature in his work. He designed the gardens to give constant colour throughout the year.

Monet loved to record the interplay of light and the seasons in his paintings and his garden gave him inspiration. His famous ‘lilies’ series is an example of his fascination with light and colour.

The best time to visit depends on the plants you want to see. Personally, I prefer late spring and early summer.

The Loire Valley is noted for its many Chateaux, many of which have stunning gardens. I chose Chateau Villandry because of its fine example of Renaissance formal gardens in France. There are six formal gardens in all, each one laid out in a symmetrical manner.

There is a water garden with fountains and ponds, an ornamental garden of clipped box hedges forming intricate patterns and filled with flowering plants according to the season and a formal vegetable garden laid out in a series of nine squares. Although all six gardens are special, it’s the ornamental vegetable garden that is the most famous.
Summer is the best time to visit.

As a result of sheltering walls, a mild climate and long hours of sunshine the Tresco Abbey Gardens have their own microclimate. Exotic plants from every continent on the planet (Antarctica excepted) thrive here. The gardens, originally private, were built in the grounds of a ruined Benedictine abbey.

Often referred to as Kew without the glass, it is home to thousands of species of plant. Spring flowering plants and shrubs appear earlier than on the mainland of Cornwall and Autumn lasts well into winter. It is said that there are 300 species of plants in flower at the winter solstice.

Despite its name, Kew Gardens is in fact an internationally renown research establishment and botanical gardens. Set up in the age of the Victorian plant hunters its glasshouses reflect its heritage. However, it has kept pace with the times and there are several modern buildings including the treetop walkway and the Princess of Wales Conservatory.

Apart from the many plant collections housed in conservatories and the iconic glasshouses, there are gardens and borders filled with plants and shrubs. Kew is definitely an all-seasons garden however, it’s the most beautiful in spring and summer.

The Royal Horticultural Society maintains four gardens across the UK showcasing garden design, planting and plants. Each have their specialities and features, but all aim to provide year-round interest.

Wisley in Surrey is known for its impressive mixed borders, woodland and rock gardens. Rosemoor in Devon is noted for its Hot Garden and the collection of scented roses. In Essex, Hyde Hall has extensive views and is best known for the Dry Garden. Harlow Carr in North Yorkshire has fine examples of wildlife meadows, woodlands and stunning borders.

There are thousands of gardens across Europe that can be visited. Many stately homes, numerous chateaux and hundreds of palaces show off with their stunning gardens. Some gardens began in the countryside and developed into great parks, others were far more formal and sought to control nature.

I believe that a visit to a garden when travelling is a must.