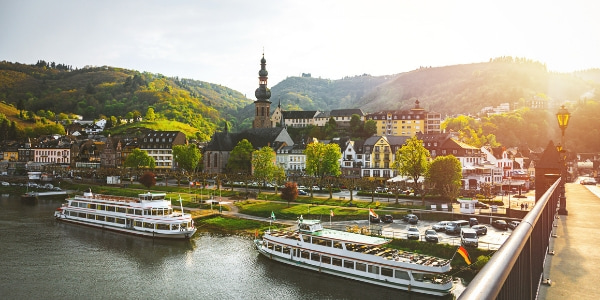 Have you ever wondered what a river cruise is like and whether it’s right for you? The boats are obviously smaller than cruise ships and there is a more intimate atmosphere. You are always within sight of land which makes the experience a great deal more interesting. River cruising takes you right in the heart of the country (or countries) you are exploring.

The Rhine is one of the great rivers of Europe and has played a major role in its history. It was, and still is, a major trade route from the North Sea to central Europe.

I went on a cruise following the Rhine from Amsterdam in Holland to Basel in Switzerland. Here I will give an idea of where a Rhine river cruise visits and what you can expect to see along the way. This will vary depending on the cruise company and the theme of the cruise.

You can take a river cruise along the Rhine in either direction with side trips along the Moselle, the Neckar or the Main rivers.

It would be wrong to think that a journey down the Rhine is all romantic medieval castles, vine-covered valleys and towering cliffs. All these landmarks are in a relatively short stretch of the river known as the Rhine Gorge, which has been thoroughly romanticised, by numerous poets and writers.

The Rhine was a major trade route to Central Europe from the north and where there is trade there is usually industry. The Rhine is no exception. The northern reaches of the river pass through the industrial heartlands of Germany and the Netherlands.

Although the cruise started in Amsterdam, the Rhine itself empties into the North Sea at Rotterdam.

Most cruises begin with a city tour before a late afternoon or evening departure. Other than a series of locks and the occasional windmill there is little to see other than flat land and industry. All this is passed during the night and by the time the following day arrives the boat is approaching the City of Cologne.

Originally a Roman Colony, Cologne was an important outpost of the Roman Empire.

The twin towers of the cathedral are the most striking feature of the skyline and are well worth a visit.

There are plenty of Roman remains found underground – much of it uncovered during allied bombing of the city. Many of the artefacts discovered and some well-preserved mosaics are displayed in the Römisch-Germanisches Museum adjacent to the Cathedral. Most of the sights in Cologne are within walking distance of where the boats dock so you have the option of taking the organised tour or sightseeing by yourself. If you get the chance visit the Chocolate Museum and stop for a chocolate indulgence on the terrace overlooking the Rhine. Also, the city is home to the perfume that bears its name, Eau de Cologne.

The River Moselle to Cochem

After another overnight journey, the Moselle meets the Rhine at Koblenz beneath an impregnable looking fortress. Many of the cruise boats will take the side trip down the Moselle to Cochem. The river is famous for its wines and stunning scenery. On a bend in the river, Cochem is a picturesque medieval town with a castle perched high above. Most excursions here take in the castle or a wine-tasting.

Back on the Rhine, the boats now enter what is usually dubbed the Romantic Rhine.

Here, the river flows through the Rhine Gorge with castles high up above the river and occasionally on islands in the middle of the river. When sailing through the industrial heartlands the boats travel along great stretches of the river at night. Now, because of the scenic beauty, they sail this section of the Rhine during the day.

The highlight of this section of the Rhine is the cliffs of Lorelei. Here at a sharp bend, the Rhine narrows with many rocks and whirlpools to catch the unwary. Legend has it that the beautiful maiden, Lorelei, with a siren-like voice lured sailors onto the rocks below the cliffs where they were lost in the whirlpools never to be seen again. The poem Die Lorelei made the story famous and has been set to music by numerous composers.

South of the Rhine Gorge are the cities of Rüdesheim famous for its Mechanical Musical Instruments Museum, and Mainz known for its cathedral and Gutenberg Museum. Many boats stop at Speyer, not because it is an interesting port of call but because it is a convenient place to take a short trip to the old university town of Heidelberg and its castle on the River Neckar.

The medieval city of Strasbourg is best known for being the home of the European Commission on Human Rights and the seat of the Council of Europe. Its medieval centre is a delightful place to wander, especially Petite France where there are a plethora of half-timbered houses with flower-bedecked balconies overlooking canals and narrow streets. The cathedral, the tallest medieval building in Europe, towers above the city. Inside the cathedral is an astronomical clock, adorned with the Parade of the Apostles, which draws visitors to the cathedral at noon each day.

Finally, at the end of the trip, you arrive in Basel, Switzerland. The city is compact and eminently walkable. The medieval old town is mostly centred around Marktplatz which is overlooked by the colourful red sandstone Rathaus. The 12th-century cathedral has great views over the Rhine and is the burial place of the Dutch scholar Erasmus.

Please note: If you are considering a river-cruise, you’d need to make sure you’re covered with Cruise travel insurance. Standard travel insurance policies may not cover you for non-land based trips.