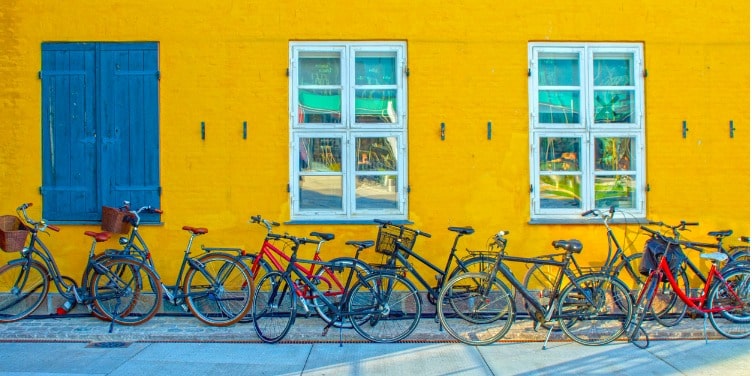 As demand for sustainable travel grows, cycling holidays offer a way of mimimising your carbon footprint while exploring.

Hiring a bicycle at your destination saves the hassle of transporting your own. If you’re not sure you have the stamina to spend a day cycling, you can always save your legs and hire yourself an e-bike.

Here’s a look at five of the most bike friendly cities in Europe: 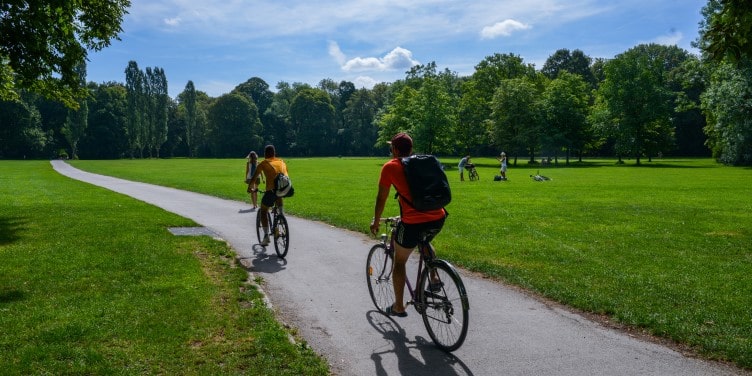 Central Munich is relatively flat, one of the key characteristics of cycle friendly cities, and offers plenty to do and see.

Bicycles are available for hire from Munich Central Station, meaning it’s possible to mount up straight after stepping off the train. The well-developed network of cycle lanes in Bavaria’s state capital makes it easy to pedal between points of interest.

Locals take pride in explaining that the Englischer Garten, Munich’s public park, is larger than New York’s Central Park. The park is bike-friendly and landmarks in the park are connected by cycle lanes. They include the temple-like Monopteros and wooden Chinese Tower, a multi-level pagoda within a popular beer garden. 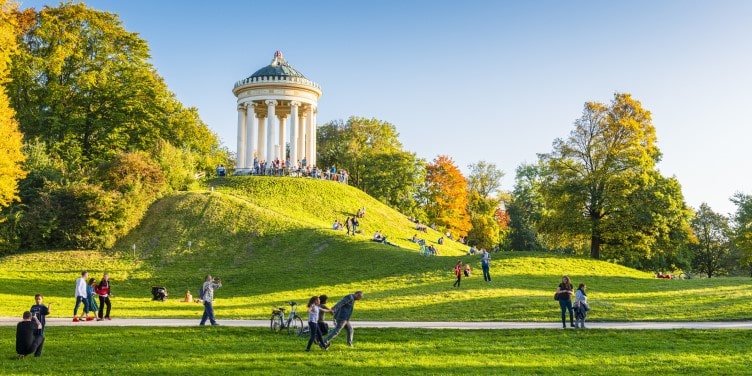 Packed with information delivered in an entertaining way, guided bike tours are an easy-paced way of getting to know the city. Highlights often include the grand former Residence of Bavaria’s rulers and the Neogothic New Town Hall.

The municipal building’s chiming clock tower in the city centre draws crowds to Marienplatz to watch 32 animated figures jousting and dancing, reenacting two key events in the city’s history. Gather around the Glockenspiel to watch the show at 11am, 12 midday (and 5pm during summer months). 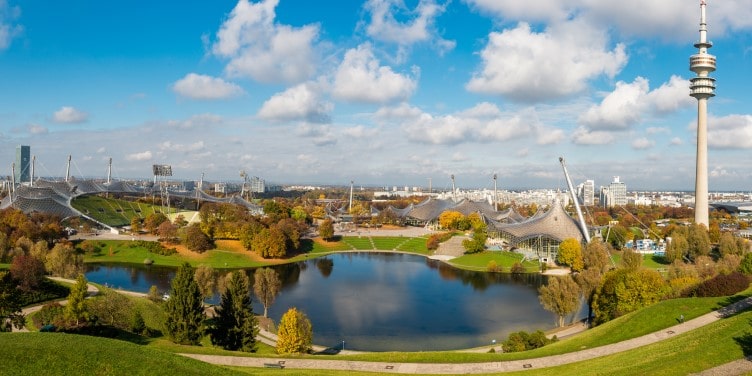 Nymphenburg Palace is an elegant summer residence set within parkland, a 30-minute ride from the city centre. The Olympic Park, landscaped to host the 1972 Summer Games, is just six kilometers from Marienplatz. Munich Zoo is a pleasant, 20-minute ride along the banks of the River Isar.

Famously, the Netherlands counts among the world’s most bike-friendly countries. If you’re a first-time visitor to Amsterdam, remember to look both ways before stepping into cobbled cycle lanes that clank and rattle with masses of bicycles. Cyclists have the right of way over pedestrians and it’s common courtesy to let them pass before crossing lanes. 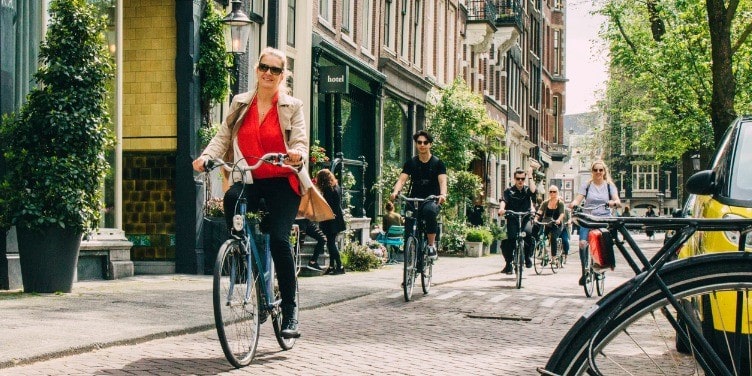 A little over two hour’s train ride from Amsterdam, and you’ll find yourself in Groningen, whose cycle routes are a great way to explore. Groningen’s St Joseph Cathedral was designed by Pierre Cuypers, the architect who designed the capital city’s central station and the popular Rijksmuseum – under which a bike path runs.

Bicycles are available to hire from street side locations in Groningen’s city centre and across the Netherlands. A days’ rental costs less than £5. 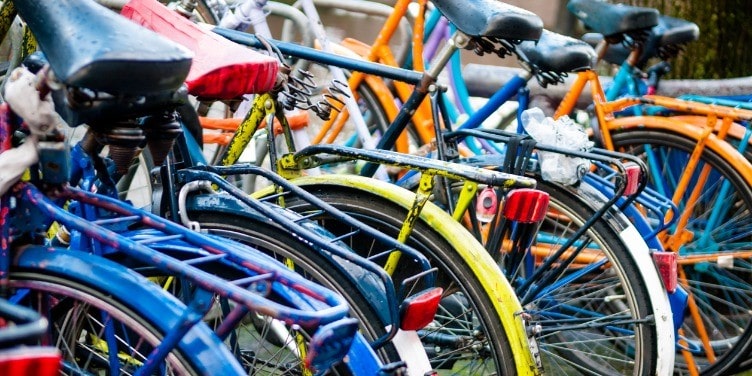 Guided cycling tours are a way of getting your bearings in Groningen. Highlights include Prinsentuin garden and nearby Martinikerk. Afterwards, climb the 260-steps of the spiral staircase in the medieval tower that doubles as Groningen’s city icon for panoramic views over the city.

Reitdiep Marina is a flat and easy 15 minute ride from the city centre. From there you follow the waterway through the countryside. Visiting the marina brings opportunities to view yachts moored in a basin flanked by colourful houses that wouldn’t look out of place reflecting in a Scandinavian waterway.

The townhouses overlooking the Nynhaven canal in central Copenhagen make it one of Europe’s most photographed streets. The oldest of the many colourful properties dates from the late-17th century. 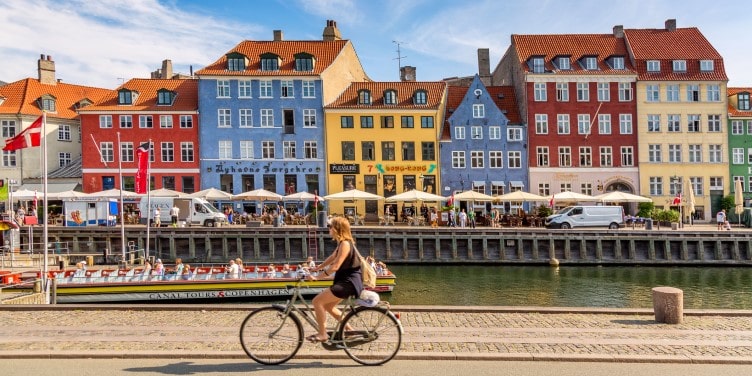 From there it’s an easy 10-minute cycle ride to the promenade at Langelinie, where you will find the bronze statue of Andersen’s most famous characters, The Little Mermaid. was sculpted by Edvard Eriksen. Though Edvard Eriksen’s sculpture underwhelms many visitors, the waterfront area is well worth seeing for its relaxed atmosphere.

Most of Copenhagen’s commuters use bicycles to get about and a scattering of cycle hire shops across the city makes it easy for visitors to join them. Thanks to infrastructure designed with the needs of cyclists at its forefront, the Danish capital feels reassuringly safe and is possibly one the most bike-friendly cities in the world.

That said, no matter where you are, it’s important to stay alert for traffic and other potential dangers when combining cycling and sightseeing. 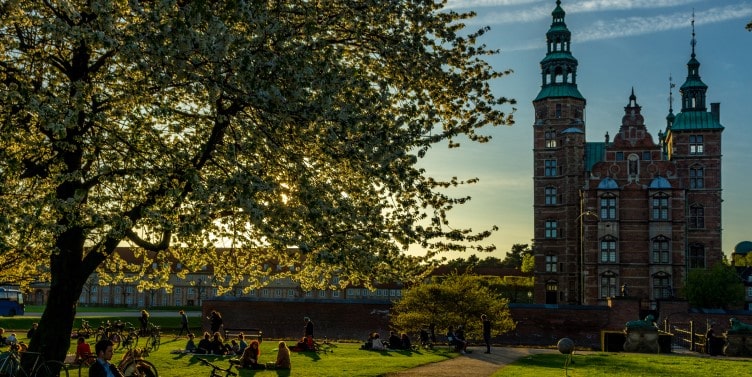 The Danish crown jewels count among reasons to ride to nearby Rosenborg Castle in the heart of the city. Whereas e-bikes may help to ease the two-hour journey to Frederiksborg Castle, the former royal palace that is today home to Denmark’s Museum of National History. If a lengthy bike-ride isn’t for you, you can head there by train (with your bike) to enjoy the lakeside views.

Within Copenhagen, half-day guided contemporary architecture tours point out some of the city’s boldest modern designs, including state-of-the-art student housing and the Royal Danish Opera House.

On a continent dotted with so many bike friendly cities, Portugal is often overlooked as a destination for cycling holidays. Yet the country’s warm, sunny climate makes it a rewarding European city to explore by bike. 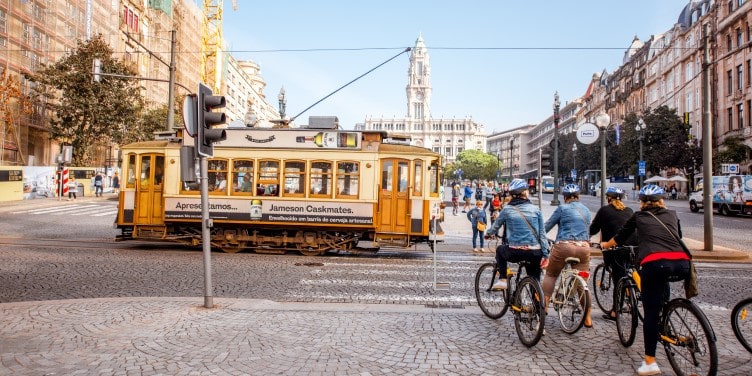 Central Porto has more than 50 kilometres of cycle paths. Three-hour guided tours on e-bikes are a fun way to see it’s key attractions, including the grand premises of Palacio da Bolsa and the vibrant Ribeiro district, which looks onto the River Douro.

Port wine is blended and aged across the arching Dom Luis I Bridge in neighbouring Vila Nova de Gaia. The steep, cobbled streets rising from the riverside can prove challenging on a bicycle but they’re worth climbing to visit the port houses, if just for the wine tasting!

Hiring a bicycle or e-bike is a great way of getting to the impressive Serralves Museum of Contemporary Art. From there continue to Portugal’s largest urban park, the Parque da Cidade do Porto, before relaxing on one of the beaches lapped by the Atlantic. 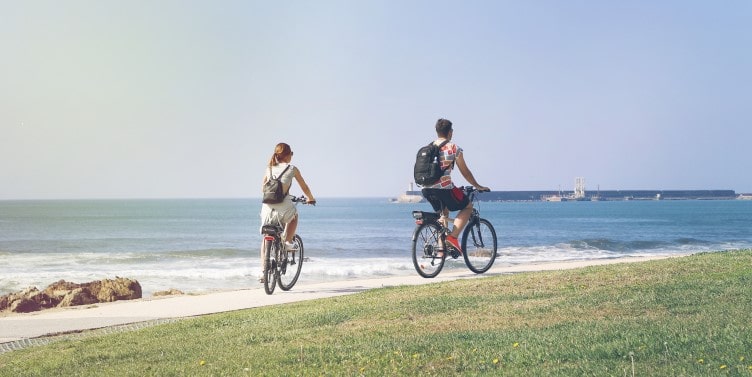 South of the Douro’s mouth you have the option of joining the Atlantic Coast Route long-distance cycle path. Otherwise known as Euro Velo 1, the route continues through Lisbon on its way to Sagrés and following it can be ideal as the framework for a multi-day cycling holiday.

Immediately south of Porto, cycle routes lead you to some of the region’s most beautiful beaches, including Praia da Magdalena, whose golden sand is just 14 kilometres from the city centre.

Belgium is renowned for being home to some of the most bike friendly countries in Europe. Among them is the city of Leuven in Flanders.

With colleges throughout the city, the KU Leuven traces its roots back to 1425. Unsurprisingly, many of the university’s students and teaching staff still use bicycles to get around. 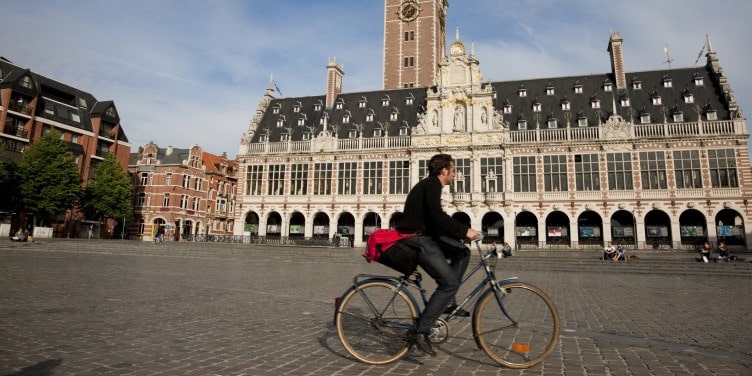 Offering views over Leuven’s rooftops, the tower of the University Library – designed by Whitney Warren, also the architect of New York’s Grand Central Terminal – is a good place to find your bearings.

Park Abbey, a stunning 12th-century heritage site, is just a 10-minute ride south of the city centre. While heading that way, it’s worth calling at the UNESCO-designated Great Beguinage, a historic gated community with the feel of a city within the city. Built to house Christian women, it has cobbled streets and 17th century houses with religious sculptures above doorways.

Leuven Leisure rents out bicycles and e-bikes, and operates guided cycle tours. If you like the idea of visiting local breweries, join the tour that introduces Leuven’s brewing heritage and takes you past the city’s key sights.

Leuven’s highlights include the medieval town hall, which is adorned by sculptures of 236 figures associated with the city, including the artist Dieric Bouts. His Altarpiece of the Holy Sacrament predates Leonardo Da Vinci’s depiction of the last supper and is displayed in St Peter’s Church, administered by the Museum Leuven.