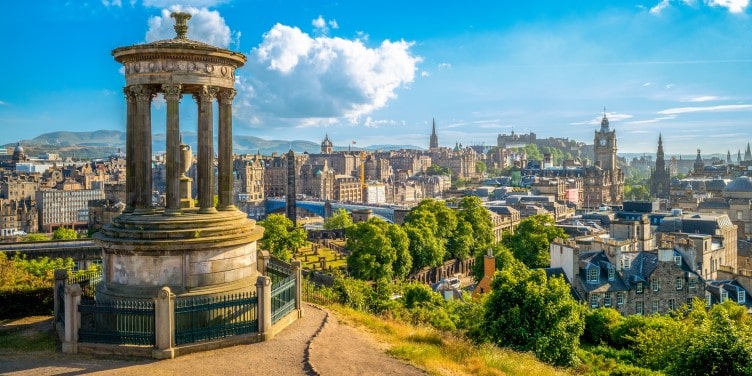 There is no better way to experience a city, and in turn get a feel for the culture of a country, than to explore it on foot.

Without further ado, here are five walkable European cities for your next adventure.

Split into two distinct halves, Edinburgh is one of the most walkable cities around.

Start your walk at the city’s highest point, the Castle. It’s a fascinating start to your tour with The Scottish Crown Jewels and the huge 16th century cannon, ‘Mons Meg’, on display.

Walk eastwards from the castle and cross into the Lawn Market with the Writers Museum on your left and into The Royal Mile. Gladstone’s Land on the north side, is the best surviving example of an Old Town tenement from the 17th century.

The Royal Mile is at the heart of Edinburgh’s Old Town, with the Castle at its head and the Palace of Holyrood house at its foot. Its name comes from its tradition as a processional route of Scotland’s Monarchs for the last 500 years. Turn off and explore the side alleyways for quaint shops selling the city’s world-famous tartan and whisky. 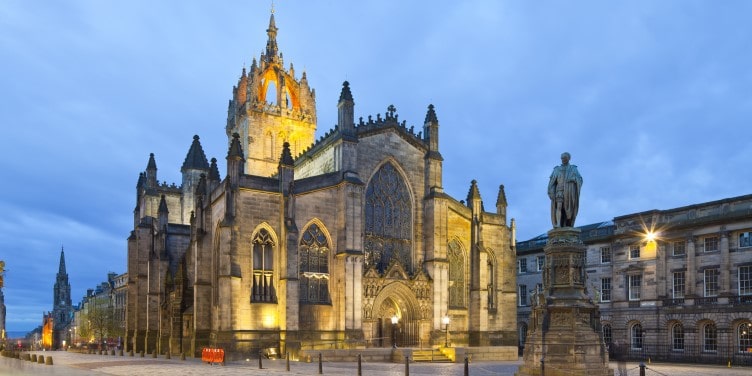 On your right you will soon pass St Giles’ Cathedral with its amazing Crown of Thorns spire. Further on you’ll spot the towering Tron Kirk. This 17th century church has marked the heart of Edinburgh’s Old Town for almost 400 years and now serves as a visitor information centre.
You have a choice here to turn south and explore the old city streets, such as Candlemaker’s Row and it’s statue to Greyfriars Bobby, or descend northwards into the Georgian New Town.

Taking Cockburn Street opposite with its curving descent brings you into the New Town and out onto Princes Street. Turn left and walk towards the Scott Monument, a memorial for the Scottish author Walter Scott. The contrasting, but fascinating, Royal Scottish Academy and National Gallery are well worth a visit too. 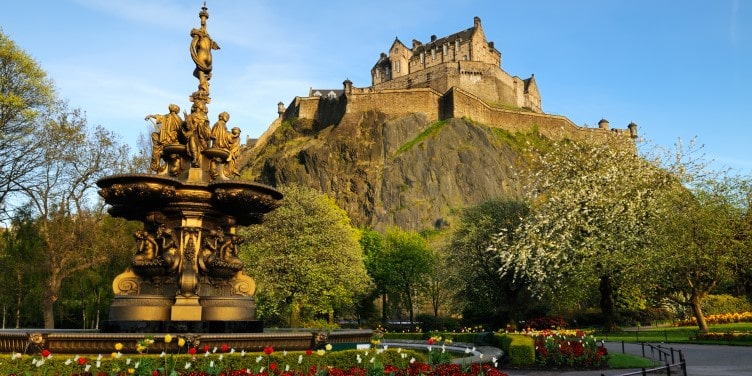 Follow the sloping path into the delights of West Princes Street Gardens with its well-manicured gardens, monuments and memorials, while the castle watches from above.

At the end of the gardens cross Princes Street and walk up towards Charlotte Square and turn immediately right into Rose Street with its mosaic of craft, artisan and souvenir shops, pubs and restaurants. It’s a great place to end your walk at one of the outside table bars and watch the world go by in the company of a wee dram. 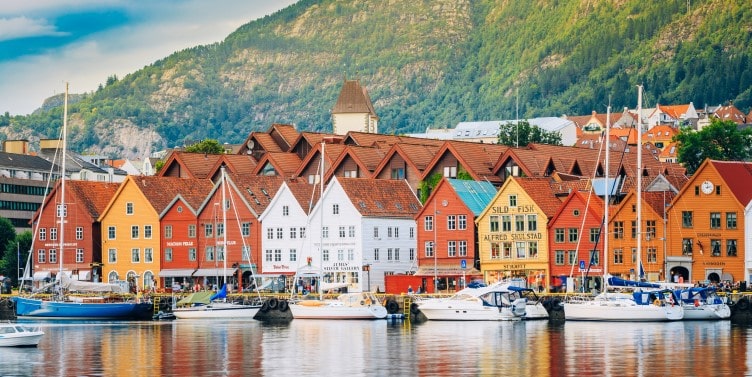 Despite being the second-largest city in Norway, colourful Bergen still manages to retain it’s small-town charm. It’s also best known as the gateway to the magical Norwegian fjords.

Start your walk on the northwest end of the harbour at Haakon’s Hall which houses the Bergen Museum and is part of the original 13th century castle of the city. You can explore the grounds and walk along its walls.

Walk eastwards along the harbour wall and into the historical Hanseatic Wharf where you’ll find Bergen’s iconic buildings of The Hanseatic League merchants.

These beautiful buildings now house galleries, shops, restaurants and bars where you can sit and soak up the atmosphere. At the north end, you’ll find the Hanseatiske Museum where you can learn of the area’s history.

Hidden behind the colourful facades is a warren of small streets with artists, antiques and bric-a-brac shops. It’s well worth exploring before returning to the waterfront.

A short walk from the wharf brings you to the entrance to the Fløibanen funicular railway, Bergen’s most popular tourist attraction. 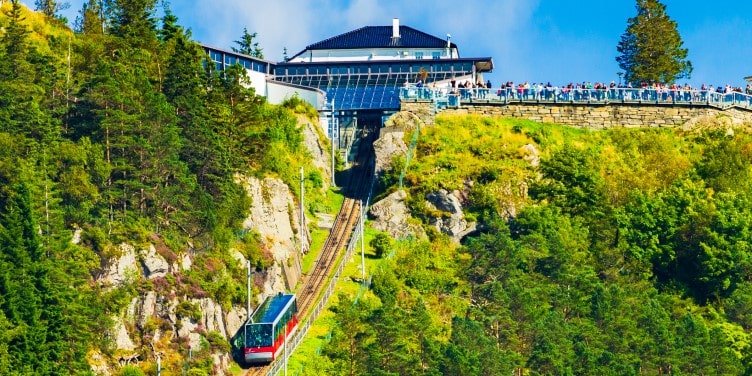 The railway is an absolute treat as it takes you up the 1,000 feet steep slope for breathtaking panoramic views of the city and into the fjords beyond. You can walk down if you wish but most people have a coffee and soak up the view before travelling back down on the railway.

Retrace your steps from the terminal and you will come to Torget where you will find Bergen’s Fish Market at the head of the harbour. Here you’ll find plenty of places to eat, but beware, they can be expensive! 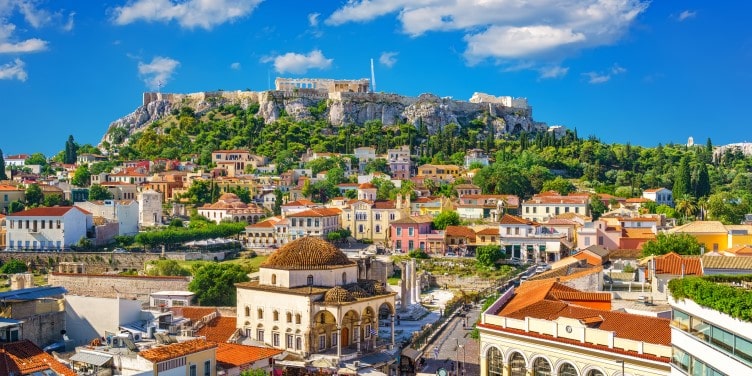 The joy of Athens is that all of the major archaeological sites are well within easy walking distance, including the Panathenaic Stadium – the venue of the first modern Olympic Games in 1894.

The Acropolis is a good place to start your walking tour. Book a ticket for first-thing in the morning to avoid the coach loads of tourists and to escape the midday sun.

Once you descend, walk along the southern edge of the Acropolis, past the two theatres. The second of these, the Temple of Dionysus, is the oldest theatre in the world. Look through the iron grate to stand where actors stood ready to make their entrance.

At the end you will see the ancient pillars of the Temple of Olympian Zeus and the Roman Arch of Hadrian. Walk northwards from the Arch and turn right. Walk down the Vasillas Olgas until you see The Panathenaic Stadium in front of you.

Built in 144 AD it is the only stadium in the world constructed entirely of marble and hosted the first Olympics of the modern era in 1896. 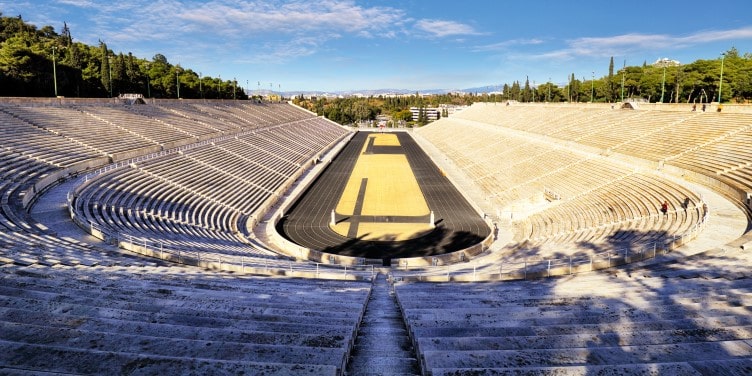 Now walk northwards up Irodou Attikou, past the National Garden and the Palace with the Greek soldiers, in traditional costume, on guard and at the end of the street you will see the Benaki Museum.

This is one of Athens’ treasures, as it takes you on a journey through Greek history and culture, from the Stone Age to the 20th century. Some of the classical period jewellery, from Crete, is stunningly beautiful.

Walk along westwards until you come to Syntagma Square with its unusual rectangle block fountains and visit one of the traditional pastry shops for a thick local style coffee with a galaktoboureko-custard cream enclosed in filo pastry and soaked in syrup.

Leave the square at the southwest corner, via the long shopping street of Mitropolis, to bring you to Monastiraki at the base of the Acropolis. 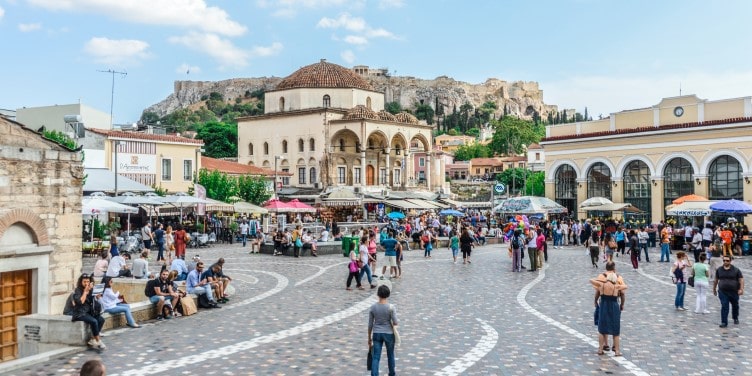 This distinctive old Athens area is full of narrow, irregularly criss-crossing streets. Do try and visit on a Sunday when the flea market happens. You can buy anything here from old books and souvenirs to hats, bronze sculptures, clothes and musical instruments. 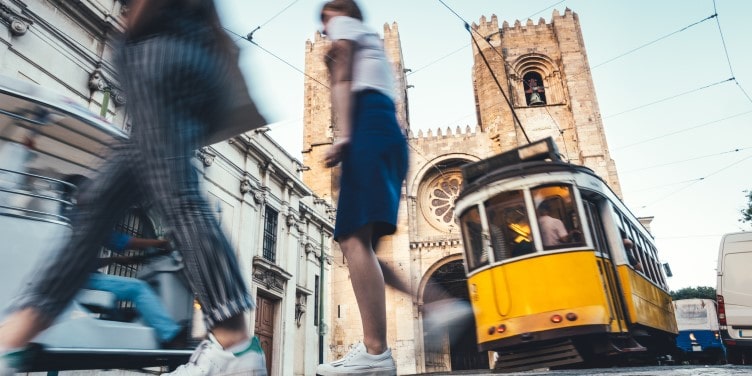 To save your legs a walking tour of Lisbon should start on a rattling yellow tram! Take the Route 28 service up the steep slope (it will take about ten minutes to walk) to the 12th Century Se Cathedral with its castle-like exterior; it is one of the city’s oldest monuments.

The cloisters to the rear of the cathedral have archaeological excavations where you can see the layers of the city’s past, peeled back for your inspection.

To return to the city below just follow the tram lines down through the narrow street until you arrive at The Praça do Comércio (The Commercial Square).

With its lemon meringue-coloured buildings, it was once a centre of commerce with ships berthed along its southern side. Walk to the southern end of the square, stand on the banks of the Tagus and look behind you to fully appreciate its grandeur. 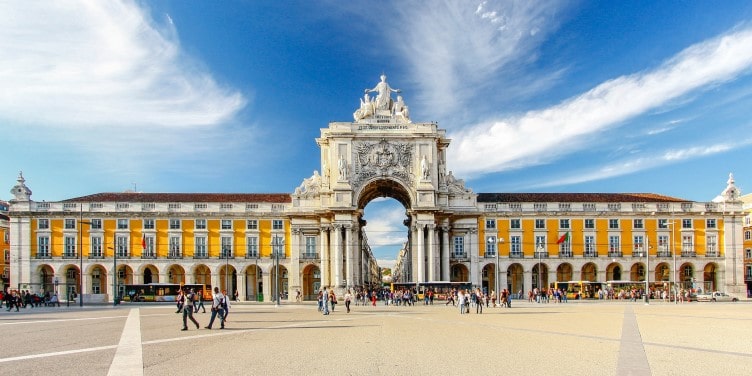 At the northern end you will see a massive triumphal arch which leads on to the city’s main thoroughfare, the Rua Augusta.

The shaded arcades, either side of the arch, have restaurants and local artisan stalls where you can pick up a bargain.

Walk up the Rua Augusta, the city’s main pedestrian street, lined with boutiques and outdoor cafes and do remember to look down as the whole street is one huge mosaic tiled pavement. If you look carefully, you might even spot a plastic cow sticking its head through a shop window! 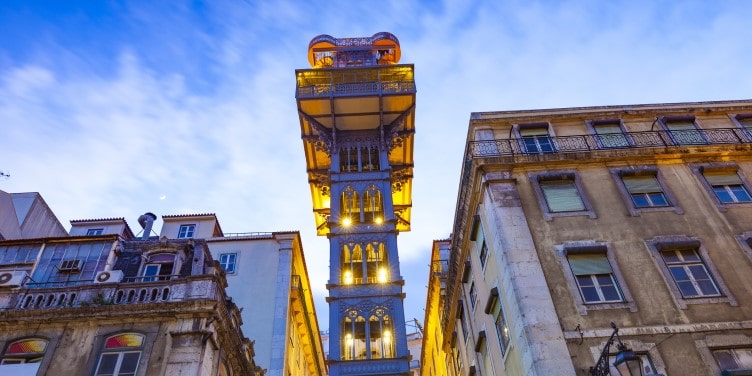 Halfway up, turn left into Rue Santa Justa and Largo to visit the Santa Justa Elevator where you can take the lovely wooden lifts to the top of the tower for magnificent views of the city spread out below you.

Continue walking up the Rue Augusta and you will arrive at Rossio, a large square which is often described as Lisbon’s nerve centre. Don’t worry you’re not seasick, the mosaic pavement was laid with a 3D effect of rolling waves! 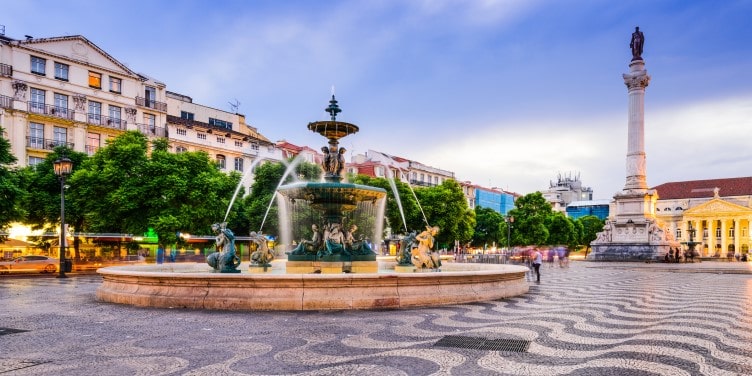 If you like a treat after all that walking, then you’re in luck. The city’s oldest pastry shop, Confeitaria Nacional, is just off the southeast corner of the square is a must for anyone wanting to try the city’s iconic palm-sized ‘pastel de nata’ – a creamy custard tart. They’re delicious! 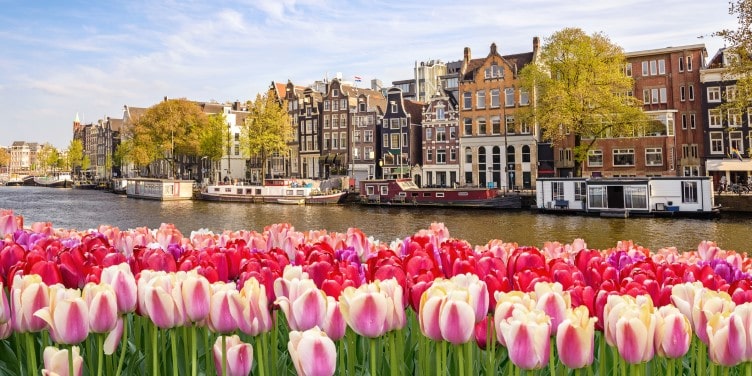 Unlike most cities, Amsterdam is relatively traffic-free which makes it perfect for exploring on foot.

The world-famous 17th-century Canal District forms the heart of the city. Follow the canals and take in the city’s bridges, houseboats and iconic Dutch canal houses with their ornate gables. If you’re short on time, Herengracht, Prinsengracht and Keizersgracht are the three main canals to follow.

Follow the Prinsengracht canal and wander into the Jordaan neighbourhood where the narrow streets and quaint buildings are filled with art galleries, antique shops, courtyard gardens and delightful bars and restaurants.

While in Jordaan, visit the Anne Frank house where Anne and her family hid for two years during the Nazi occupation of the city. As one of the top attractions you’ll need to book tickets in advance if you wish to visit. There are some steep stairs and small spaces, so be mindful when booking tickets. 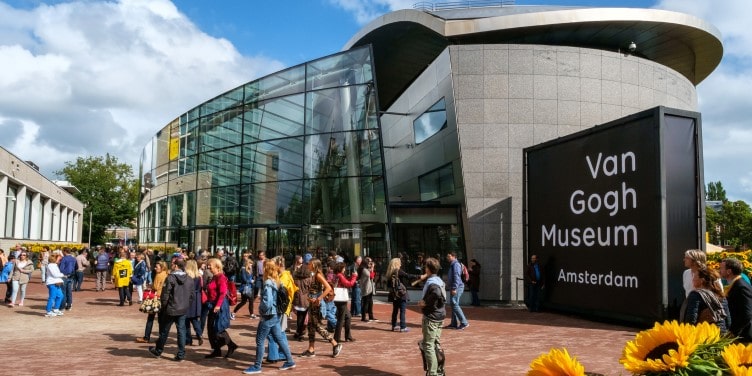 For culture then Museumplein is the beating heart of the city. Home to the Rijksmuseum, the Van Gogh Museum, the Stedelijk Museum and The Royal Concertgebouw which are all must-sees if you have the time.

Feeling hungry? Stop at one of the many haringhandels (herring carts) serving up raw herring. Ask for a ‘broodje haring’ to get the fish served in a small sandwich with pickles and onions. Delicious!

Tips to make the best of your walking trip 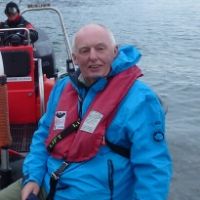