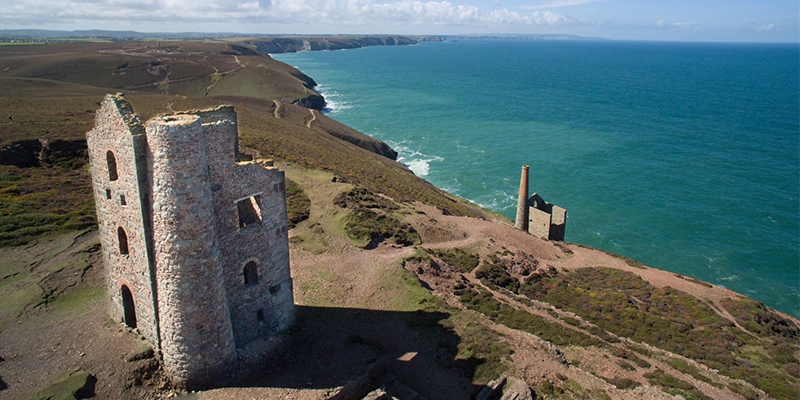 Aidan Thomas is not the only attraction of the BBC TV series ‘Poldark’. The stunning locations where the series is filmed are attracting ever greater numbers of visitors to Cornwall.

The books, by Winston Graham, are set in the tin mining communities of north and west coasts of Cornwall. For the most part the series has been filmed in and around these locations.

Here are eight places you must visit to give you a feel of the Poldark landscapes of Cornwall:

Above Chapel Porth Beach stands one of Cornwall’s most iconic tin mines, Wheal Coates. Perched on the cliffs the engine house was used to pump water from the Towanroath shaft which went down 200 metres and then out under the sea.

The historic and well preserved engine houses of Wheal Coates near the village of St Agnes often represent the mines of Nampara Estate which belongs to Ross Poldark. North of here is the rugged St Agnes Head, where many clifftop scenes were filmed. Between Wheal Coates and St Agnes Head, Ross can often be seen in the series galloping across the heathland.

The stretch of coast between these two mines is rich in Cornish tin mining heritage and was a real gift to location managers. The Levant mines, owned by the National Trust, are a treasure trove for those interested in the tin mining of Cornwall. The mine buildings feature in the Poldark series as the Tressider Rolling Mills.

Dramatically perched on rocks looking out onto the Atlantic is the Bottalack mine. It would be hard for any location manager to resist the pull of such a stunning setting. With the seas pounding the rocks below, the Bottalack mine takes on the role of Ross Poldark’s Wheal Leisure.

They may appear to be dramatic and inaccessible, but there is a well maintained path down to the ruins where visitors can, with care, explore the ruins for themselves and imagine the days when they were real working mines.

The Grade II listed harbour at Charlestown near St Austell has featured in more than one period production. The ‘Onedin Line‘ from the 1970’s was perhaps the most significant until the BBC used it as the port of Truro in the ‘Poldark‘ production. It is also part of a UNESCO World Heritage Site chosen as part of the Cornwall and West Devon mining landscape. It is the best example of an 18th century harbour anywhere in Britain and was chosen because of its outstanding universal value.

There is always at least one tall ship moored alongside the quay which provides even more authenticity for visitors.

At the end of a narrow valley and hemmed in by rugged cliffs, this beach with its white sands and clear turquoise blue waters is one of the most stunning beaches in Cornwall. In the series it plays the role of Nampara Cove, ‘Ross’s Beach’.

Today the beach is known as the landfall for telephone and fibre optic cables from the Americas and Africa. Buried deep in the sands you won’t see any sign of them in the filmed scenes or if you visit the beach.

Located near the tip of the Lizard Peninsula this is another stunningly beautiful beach that often doubles up as Poldark’s Nampara.

The wide expanse of sand between Newquay and Perranporth with the distinctive twin stacks offshore, known as Gull Rocks, often features in the series. It has played the role of Warleggan’s beach and provides the backdrop for a gallop by Ross and others across the sands.

Just a couple of miles from Land’s End is the tiny fishing cove of Porthgwarra. With its clutch of cottages and cobbled slipway, it is surprising that more people haven’t discovered it. It is possibly the most filmed of all the beaches featured here. The famous swimming scene, where Ross is bathing while Demelza secretly spies on him, is arguably the most memorable.

The sweeping sands of Perranporth do not feature in the BBC’s Poldark series… yet. However, they do feature in the Poldark novels but under the fictional name of Hendrawna Sands.

They provided some of the inspiration to the author of the Poldark novels, Winston Graham. He moved here with his family when he was 17 and spent much of his life here. He began writing the Poldark saga right here in the 1940s but sadly all that remains is a memorial stone bench on the headland where he lived.

There are a great number of beaches and coves to be explored in Cornwall and not all those featured in the Poldark series are mentioned here. Likewise not all of Cornwall’s mining heritage that has featured in the period drama is included.

Cornwall is worth exploring further; there is so much more to discover that the television series has only just begun to uncover.