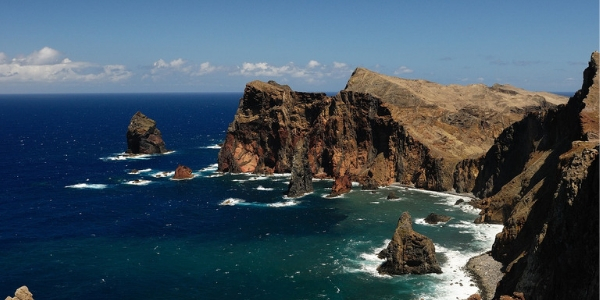 Before visiting the attractions below, make sure you check their website information. Even if the attraction is open, you might need to pre-book and follow local guidelines on social distancing. Be sure to check if you need to wear a face mask during your visit.

In the mid-Atlantic is the island of Madeira, just 308 miles north of the Canary Islands.

For an island that would fit twice inside the area enclosed by the M25, there is a huge variety of things to see and do. Here are a selection of its best bits that will give a feel for what Madeira has to offer.

Rising up the slopes from the harbour and marina, the capital of Madeira is a must on any visitor’s list.

Funchal’s Cathedral has a plain exterior that hides its impressive and decorative interior, in particular is the stunning knot work ceiling inspired by Moorish geometry. The Cathedral Square is the centre of Funchal’s social scene and is lined with cafes. The square itself, and several of the streets leading off it, are paved with black and white mosaics for which Funchal is famous for.

Adegas de Sāo Francisco is the oldest and best known of Funchal’s wine houses. Here, you get to not only taste and buy Madeira’s unique wine but learn about its history.

Originally Monte was a separate community but as Funchal expanded it enveloped the town and the nearby botanical gardens.

Monte can be reached by cable car from close to the market in Funchal centre and is a world away from the busy city centre. There are lush gardens, narrow cobbled streets and cafes where you can enjoy afternoon tea in the cool clear air of the mountains. Where Funchal has a bustling city centre atmosphere, Monte is much calmer.

There is one exception to this though – the toboggan run. Sitting in a wicker toboggan guided by two men you hurtle down cobbled roads all the way to Funchal.

Madeira is blessed with a rich and varied flora and the best place to see these without trekking the length and breadth of the island is the Jardim Botanico close by Monte. The gardens are laid out according to themes and have extensive views across Funchal.

With colourful boats pulled up on the shingle beach and fish drying in the traditional way, Camara de Lobos still has a fishing village vibe. Sir Winston Churchill (as an artist rather than a politician), who always had an eye for a great scene, would set up his easel here and paint. Wander up past the fishermen’s cottages for a view over the picturesque harbour.

One of the unique features of Madeira are the levadas. Basically small channels, they were constructed to take water from the north of the island where rainfall is plentiful, to the south where most of the produce is grown but water is scarce.

Alongside each levada is a path, used by the men who would maintain them, making them ideal for hiking. Levada hiking is popular in Madeira and you can follow levadas through urban environments, or out in the rural locations up in the mountains.

Although not Madeira’s highest peak (it is actually third highest), the summit can be reached by road from Funchal. The views across the central massif are worth the drive and for those with an adventurous spirit and appropriately equipped, there is a footpath linking four of the mountain peaks.

Visit Santana and the North Coast

The scenery of Madeira is spectacular, none more so than the north of the island.

The north is less developed than the south and its coast is dominated by high and dramatic cliffs. There are several coastal drives including one where you drive under a waterfall.

Santana in the north is the best place to see the traditional palheiro houses, often seen on the covers of guides for Madeira. Originally cow byres, they have now become a tourist attraction and with the addition of a few mod cons are now rented out as holiday homes.

Madeira has very few beaches and those it does have are usually artificially created. However, a two-and-a-half hour ferry ride will bring you to the nearby island of Porto Santo. The island is the proud possessor of a 9km sandy beach backed by resorts and spas. Porto Santo is a great place to relax after exploration of the main island of Madeira.