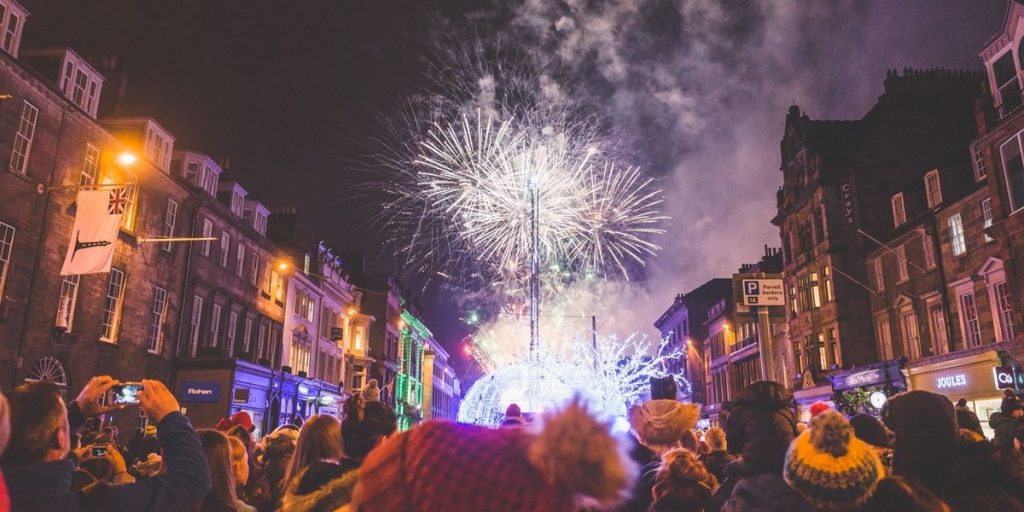 Looking for a great place to celebrate on New Year’s Eve? If you’re after amazing fireworks, an incredible atmosphere, and all kinds of fun – Edinburgh could be a winner.

In Scotland, they call New Years’ Eve Hogmanay, and the Edinburgh festival is one of the biggest celebrations in the UK. From a huge street party to an icy challenge on New Year’s Day, there’s so much going on around New Year in Edinburgh.

When to Visit for Hogmanay in Edinburgh

The Hogmanay festivities last three days, starting with a torchlight procession on 30 December and ending with a variety of events on the 1 January– including the infamous Loony Dook! If you want to make the most of your trip, be sure to stay for at least three nights, or extend your trip and spend some time enjoying the city itself.

Edinburgh’s Hogmanay celebrations kick off with a bang on December 30th, when a procession of around 40,000 people march through the streets carrying flaming torches. Better still, the whole thing is led by a crowd of Vikings in full armour!

The procession starts on the Royal Mile and heads down through the New Town to Calton Hill, where it ends with a spectacular firework display.

Tickets to be in the procession are limited, so book early if you want to take part. But if you don’t manage to get a ticket, you can still stand in the street to watch the procession pass by, or head to Calton Hill to watch as the sea of torches approaches. Wherever you are, it’s a seriously impressive sight.

Wrap up warm and hit the town centre for one of the biggest street parties in the world. Edinburgh’s Hogmanay Street Party takes over the entire city centre: roads are closed, stages pop up hosting parties for all genres of music, and the whole town gets celebrating.

There’s always an extensive line-up of bands and artists performing across the city on various pop-up stages. From DJs playing all the cheesy hits, to local bands, there’s definitely something for everyone.

There’s also an enormous ceilidh dance, which takes place below the castle every year. It’s a separately ticketed event but worth it if you want to see a truly Scottish tradition on a large scale.
If all that wasn’t enough, there are hourly fireworks leading up to midnight!

31 December – Concert in the Gardens

Alongside the city centre street party, Edinburgh’s Prince’s Street Gardens throws its own massive celebration. The Concert in the Gardens is an outdoor music festival which always has an amazing headline act as well as great (usually local) support.

Recent years have seen Franz Ferdinand, Biffy Clyro and Paolo Nutini performing. In 2019, Mark Ronson is set to take the stage! Keep an eye on the Festivals Edinburgh website and social media channels to see the announcement for next Hogmanay’s headline act.

What’s great about this concert is that the natural slope in the gardens means you can get a pretty great view of the main stage wherever you stand – although that doesn’t stop fans from queuing all day to get a spot close to the stage. Prince’s Street Gardens are also in prime position for the midnight fireworks, and the performers interrupt their act to count down to midnight, then sing Auld Lang Syne.

31 December at Midnight – Fireworks at the Castle

Speaking of fireworks, the midnight display in Edinburgh is one of the biggest and best in the UK. The beautifully lit Edinburgh Castle provides a pretty special backdrop, and the surprisingly long fireworks display is one of the absolute highlights of the Hogmanay festival.

Free event – but the best views are from the street party or the Concert in the Gardens.

If you’re feeling a little delicate after the New Year’s Eve celebrations in Edinburgh, you can join the locals for the Loony Dook. This bizarre New Year’s Day tradition is sure to take the edge off your hangover, if you’re brave enough.

To the tune of bagpipes, thousands of people in fancy dress race into the Firth of Forth – a freezing cold estuary that meets the North Sea. The water is icy, but the atmosphere is great fun. You’re sure to be a part of a wonderfully mad Scottish tradition.

When to Book Tickets for Hogmanay in 2020

Each of the main events is individually ticketed. The events can sell out fast, so it’s a good idea to follow the Edinburgh Hogmanay social media channels so you’ll hear as soon as tickets go on sale.

In 2019, tickets for all events went on sale in May, except for the Concert in the Gardens which were released on 3 September.

There were still tickets available for all events in mid-November 2018, but most events sell out by mid-December. Book as early for 2019 as you can to avoid disappointment.

Scottish Hogmanay Traditions You Should Know About

Auld Lang Syne – It may be famous all over the world, but the well-known New Year’s song was written by Scottish poet Robert Burns. At Edinburgh Hogmanay, people join hands to unite in what is apparently the world’s biggest singing of Auld Lang Syne.

First Footing – After the clock strikes midnight, marking the start of a new year, it’s a tradition in Scotland for neighbours to visit each other. They bring gifts, usually traditional items like shortbread, and in exchange, the visitor is offered a small whisky. Although it’s less common these days, many people still visit their friends and family with a gift on New Year’s Day.

How to Get There

By Train – The train from London’s Kings Cross Station to Edinburgh Waverley takes just over four hours and drops you off right in the city centre.

By Air – Edinburgh International Airport is served by several low-cost airlines and is just an hour and twenty five minutes from London. The airport is 7.5 miles outside the city centre. Visitors can take the Airlink 100 bus to the city centre from the airport in half an hour, or a taxi will cost around £25.

Unsurprisingly, accommodation in Edinburgh can get booked up fairly early on. Prices also tend to creep up the closer you get to the event. It’s best to book your travel, accommodation, and tickets at least three months in advance – or more if you’re able to.

If you’re travelling in a group, a self-catering apartment or an AirBnb can be a lot more cost effective than a hotel.

Edinburgh has hundreds of B&Bs, hotels, and hostels to choose from so there should be something to suit all budgets. Take a look at hotel comparison sites and book as early as you can – if you’re able to book now for 2020 Hogmanay, you could bag yourself a great deal.

Winter in Edinburgh can be extremely cold!

Take plenty of warm clothing and waterproofs, and be prepared for any eventuality. As the locals love to tell you, Scotland can easily get “four seasons in a day” – so layer up and be ready for the frost!

Free Hogmanay night bus services are available after the Street Party and Concert in the Gardens events. They leave from a variety of departure points, so check the Hogmanay website for more information. There are also free tram services from midnight until 5am.