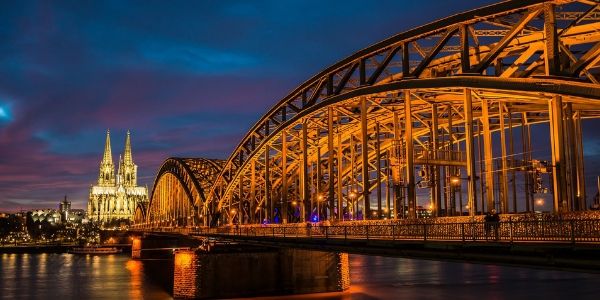 Planning a visit to Cologne and looking for things to see and do? Here are six must-see places that you should visit around the city.

All these activities are easily reached from either the railway station or the Rheingarten, where tour and river cruise boats meet.

You can also see them all in a day!

This museum is devoted to Cologne’s Roman and Germanic history. The Dionysus Mosaic is the highlight of any visit to the museum, along with an extensive collection of Roman glassware.

As a result of intensive Allied bombing during World War II, much of Cologne was reduced to rubble.

This uncovered previously undiscovered Roman remains. It’s possible to venture beneath many civic buildings and some businesses to visit the remains of Roman villas, public baths and sewers.

Europe’s busiest railway bridge is the most romantic spot in Cologne. The bridge across the Rhine from Cologne’s busy railway station has become the hot spot for lovers to express their undying love for each other. The city claims it was the first of the global phenomena of “padlock bridges”.

Thousands of padlocks engraved with messages of love are fastened to the railings that separate the pedestrian walkway from the tracks. Lovers lock their padlock to the fence as a sign of their undying love for each other and then toss the key into the Rhine below. 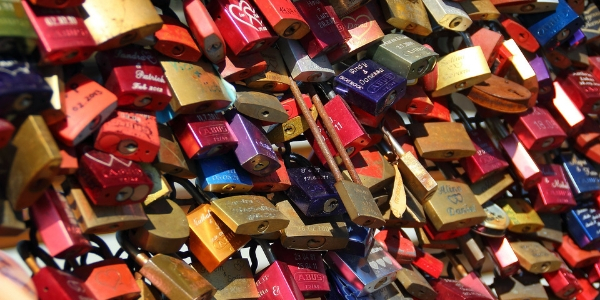 The Altstadt or Old City is a largely pedestrianised area of narrow cobbled streets and squares. It is best explored on foot using the twin towers of the Dom or Cathedral as navigation markers. Wander from the Rheingarten beside the river to the Fischmarkt. Its colourful town houses and the Romanesque church of Gross St Martin positively invite you to linger.

Full of pavement cafes and brasseries, it is one of the best squares to sit outside sipping coffee or Kölsch, the locally brewed light beer served in a 20cl straight glass.

The birthplace of Eau de Cologne

No mention of Cologne would be complete without talking about the famous perfume Eau de Cologne.

Farina House on Obenmarspforten was where the perfume was first developed, made and sold.

It’s now a museum and retail outlet. Giovanni Farina, inventor of the perfume found the stench of the non-existent sanitation and the masses of “great unwashed” too much to bear.

He invented the light perfume that he said was “reminiscent of a spring morning in Italy after the rain; of oranges, lemons, grapefruit, bergamot, cedar and the blooms and herbs of…home”.

The twin spires of Cologne Cathedral or Dom can hardly be missed.

Its twin towers and gothic architecture dominate the skyline. For nine years prior to the construction of the Eiffel Tower, the cathedral was the tallest building in the world.

Over 2 million visitors make this UNESCO World Heritage site the most visited site in Germany.

The interior is more breathtaking than the exterior with its many stained glass windows and soaring vaulted ceiling. There is a gilded 13th century repository which reputedly holds the bones of the three magi of the nativity.

The Chocolate Museum is built in an old customs house on the riverbank of Cologne’s old town.

Über modern architecture blends with the more traditional style of the old custom house to link everything under one roof.

After walking through a cocoa plantation in a tropical hothouse you enter a museum where everything from the Aztecs use of the cocoa bean to chocolate as we know it today is presented in an interactive way.

This includes working production lines where chocolates and truffles are made and novelties like Easter rabbits are wrapped by machine. Of course you can taste samples or dip a wafer in the larger-than-life chocolate fountain.

After touring the museum and purchasing chocolate souvenirs you can enjoy views over the Rhine eating and drinking the “food of the gods” on the terrace of the waterside Chocolat Grand Cafe.

For more information: Köln Tourismus has an informative website in English.