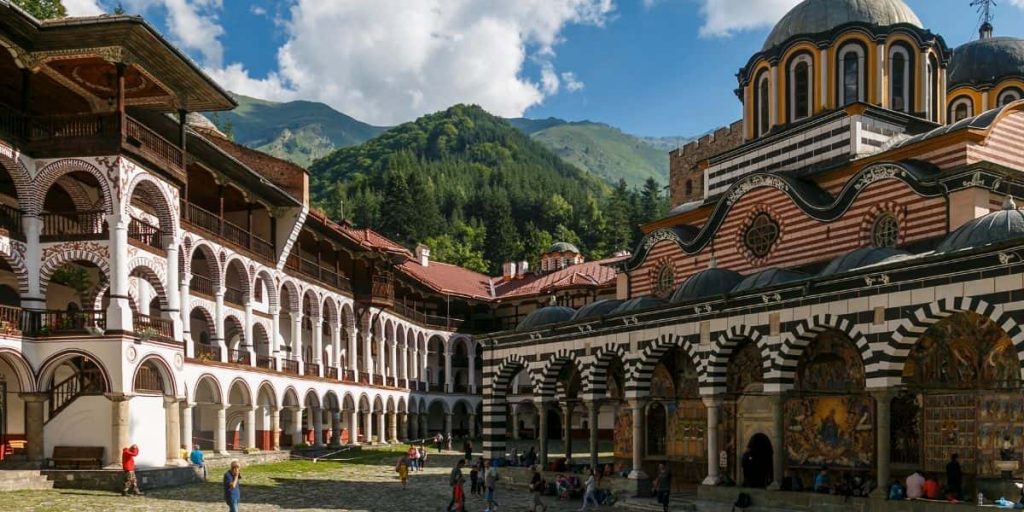 Bulgaria’s popularity as a holiday destination for UK travellers is booming.

Beach resorts along the Black Sea coastline, around Varna, promise sunshine and sand. Bankso, in the Pirin Mountains, and Borovets, in the Rila Mountains, offer landscapes ideal for summer walking holidays or winter ski breaks.

Beyond Sofia, cities like Plovdiv and Veliko Tarnovo promise plenty for travellers who enjoy breaks with culture and heritage.

In the last 20 years, visits to Bulgaria have increased by an enormous 1398% by travellers over 65. If the popularity continues, the country could compete with mainstream destinations like Spain and France!

Why has Bulgaria become such a popular destination? Here are some reasons to visit Southeast Europe’s hidden gem…

Visit Sofia for its history

Bulgaria’s capital since 1879, Sofia is home to the country’s national assembly and its presidential palace.

Grand buildings such as the St. Alexander Nevsky Cathedral and Sofia History Museum warrant visits for insights into the city’s heritage. For something a little quirkier, head to the Museum of Socialist Art, a sculpture park where Cold War era statues and busts have been moved to.

Sofia was built upon the ancient city of Serdica, one of the Roman emperor Constantine the Great’s favourite places. Excavated walls are visible in the archaeological park by the country’s constitutional court, and you can see the remnants of the amphitheatre within the atrium of the Arena di Serdica Hotel.

Explore a European capital of culture

Along with the Italian city of Matera, Plovdiv was a European Capital of Culture in 2019. Less than two hours’ drive southeast of Sofia, Plovdiv is Bulgaria’s second biggest city.

Long known as Philippopolis, in honour of Philip II of Macedon, the father of Alexander the Great, Plovdiv is home to one of the ancient world’s best-preserved theatres and the ruins of a Roman-era stadium.

Visit the Bishop’s Basilica to see the ruins of an early Christian place of worship and impressive bird mosaics.

With eye-catching architecture, including Balabanov House and Hindliyan House named after a 19th century merchant, Plovdiv’s Old Town makes a pleasant place to stroll. The Regional Ethnographic Museum is another impressive building and throws light onto traditional ways of life in and around Plovdiv.

Veliko Tarnovo, a three-hour drive east of Sofia, is worth visiting if you enjoy exploring medieval heritage. Characterised by cobbled lanes, defensive walls and Orthodox churches, the city flourished during the first half of the 13th century as the capital of the Second Bulgarian Empire.

Overlooking the River Yantra, Veliko Tarnovo’s principal attraction is the Tsarevets, the hilltop fortress that was the seat of power in bygone times. It’s worth staying after dark for the light and sound show that tells the story of the empire’s rise and fall.

To view outstanding murals, head to the nearby Monastery of the Transfiguration, one of the biggest Orthodox places of worship in Bulgaria.

Bulgarians are proud of their nation’s Thracian heritage, a culture which peaked around 2,400 years ago. If you’re observant, you’ll spot several modern designs drawing inspiration from Thracian culture.

Bulgaria is emerging as a golf destination. Though the country has just nine golf clubs, they offer experienced golfers a reason to pack the clubs and their spa facilities present opportunities to unwind.

Golf was seen as a bourgeoisie sport during the Cold War, so not played in Bulgaria. The Peter Harradine-designed course at the Hotel Riu Pravets Resort is a short drive from the birthplace of Todor Zhivkov, who led the country from 1954 to 1989.

The Thracian Cliffs Golf and Beach Resort overlooks the Black Sea and ranks as one of Europe’s most spectacular courses. Designed by Gary Player, the Thracian Cliffs’ challenging course hosted the Volvo World Match Play championship of 2013.

A handful of the country’s leading courses are clustered near Varna, meaning it’s possible to combine playing golf with a beach break. Ian Woosnam designed the links-style course at the Lighthouse Golf and Spa Resort while Gary Player masterminded the Black Sea Rama course.

Ski on the country’s highest piste

Despite the country’s location in southern Europe, Bulgarian winters are cold. Snowfall is common from December into April on mountains in the country’s south and central regions. Borovets has hosted World Cup ski races and is now home to two snow parks.

Approximately one hour’s drive from Sofia, Vitosha has the country’s highest piste, starting 1,800 metres above sea-level. The resort’s slopes offer experienced skiers and snow boarders variety while beginners can take lessons in English. The peak of Cherni Vruh, at an altitude of 2,290 metres, offers views over the Vitosha Nature Park, whose network of trails are great for hiking in the summertime.

Bankso, just over two hours’ drive from Sofia, has terrain suited to skiers and snowboarders of mixed abilities, and hosts FIS World Cup events. It lies on the periphery of Pirin National Park, whose limestone mountains, glacial lakes and rare plant species mean it is designated a UNESCO World Heritage Site. The two-day trek up to the 2,851-metre high Polezhan Peak is one of the most memorable walks in the region.

Rila National Park is the country’s largest and is criss-crossed with trails. The highest peak in the Balkans, Mount Musala, tops out 2,925 metres above sea-level and can be reached as part of a multi-day trek. While in the region, don’t miss the opportunity to view the frescoes within the Rila Monastery, which played an important role in Bulgaria’s 19th century national awakening and is another of the country’s World Heritage Sites.

Bulgaria’s Black Sea coastline offers you a choice of 70 beaches along its 378 kilometres between the country’s borders with Turkey and Romania. Varna, in the north, and Burgas, in the south, are the main coastal areas.

Cliffs, caves and bays break stretches of golden sand. This led to the naming of the Zlatni Pyasatsi resort, meaning ‘Golden Sands’, north of Varna. The sand is paler at Albena, a family-friendly resort with a range of sporting facilities.

Into activities? Kite and windsurfing count among the options in several of Bulgaria’s coastal resorts. Scuba divers are likely to be drawn by the submerged Roman port 40 kilometres north of Varna. Wrecks of Germany’s Black Sea fleet, dating from World War Two, lie in Varna Bay.

Bathe in a Bulgarian spa

More than 600 mineral-rich thermal springs have been discovered across Bulgaria. Many have healing properties, making them suitable for rehabilitation treatments and general relaxation. The culture is deep-seated; the Romans established baths in several urban areas, including at Hisar and Varna where their ruins can still be seen.

Spa culture has experienced a resurgence. Located between Sofia and Plovdiv, Velingrad has a cluster of 80 springs making it the country’s most popular spa resort. At the town of Sapareva Banya, whose geyser fountain spurts every 20 seconds, you can combine bathing with visiting nearby Rila National Park. Albena, which is known for its mineral-rich mud, is one of the Black Sea resorts offering spa treatments.

Into birding? Keen birders are drawn to Bulgaria because it lies on two of Europe’s chief migratory routes, the Via Arisitotelis and Via Pontica.

From August to October, the Poda Lagoon and lakes around Burgas draw twitchers keen to spot more than 220 species of birds. Pygmy cormorants, Temmick’s stint and Dalmatian pelicans count among the waterfowl that can be found there. Birds of prey such as the Levant sparrowhawk and Montagu’s harrier soar too.

From April into June, the conditions in the Rhodope Mountains, which straddle the border with Greece, are ideal for combining walking with bird spotting.

Black woodpeckers, saker falcons and corncrakes nest in the region, which is also home to brown bears. Efforts to preserve and nurture habitat in the Rhodope Mountains mean sightings of mammals are on the up.

Bulgarians don’t tire of telling British visitors that Winston Churchill’s favourite wine was a red from Melnik, in the country’s southwest.

Some of the estates in Bulgaria’s five wine-producing regions offer an outstanding quality-price-ratio. If you like something stronger, sample rakia, a type of brandy that can be distilled from grapes or fruit.

Must-try traditional dishes include shopska salad, made with white cheese, cucumber, tomatoes, onions and peppers. Kavarma, a style of stew laced with garlic and paprika, is hearty and widely served, often with freshly baked bread. The popular style of pie, known as banitsa, takes many forms. Those filled with cheese make for filling snacks and can be consumed around the clock.