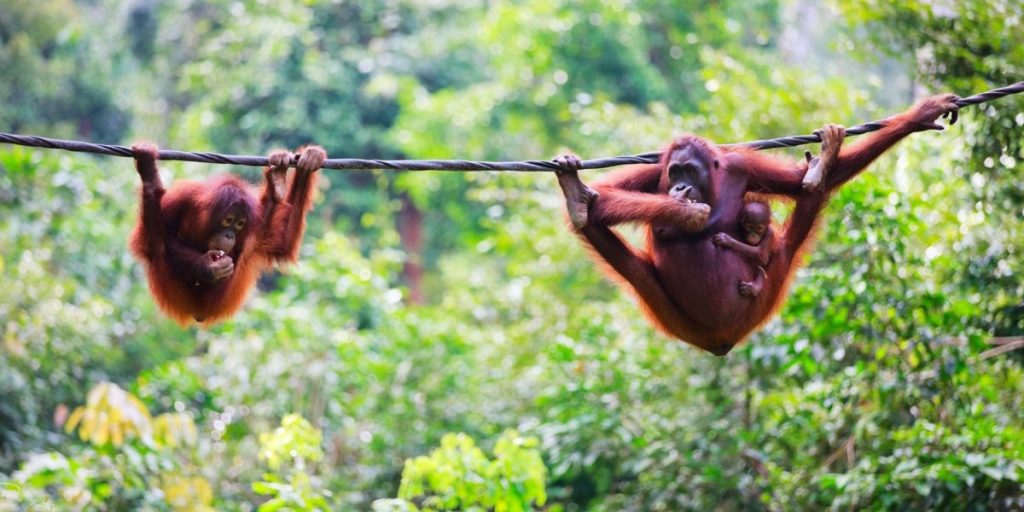 Visit a tropical paradise on the island of Borneo where you can see pygmy elephants, Orangutans and indigenous tribespeople amongst spectacular scenery.

Borneo is the third largest island in the world and is the perfect destination for travellers with a love of the great outdoors. The island is split between the three countries of Malaysia, Brunei and Indonesia and offers a wealth of tropical rainforest adventures, endangered wildlife and diverse tribal cultures.

The more adventurous of trekkers will enjoy an exhilarating hike up Mount Kinabalu which is the highest mountain between the Himalayas and Papua New Guinea. It stands at over 4,000 metres tall and offers incredibly romantic and unforgettable sunrises.

The Gunung Mulu National Park in the Sarawak territory is also a wonderful place for expeditions. The mountainous rainforest area is an UNESCO World Heritage Site and boasts an interesting mix of caves and limestone karst formations.

When most people consider taking a trip to Borneo, they do so to visit the orangutans. Unfortunately, due to a massive reduction in natural habitat, it is becoming increasingly difficult to spot orangutans in the wild. However, visitors can get up close and personal with these beautiful creatures at sanctuaries such as the Semenggoh Wildlife Rehabilitation Centre in Sarawak or the Sepilok Orangutan Rehabilitation Centre in Sabah.

Orangutans may be the most famous inhabitants of Borneo, but as the island is one of the most biologically diverse habitats on the planet, there are plenty of other unique types of species to seek out. In particular travellers will marvel at the incredibly cute Borneo Pygmy Elephants who stand at around 8-10 feet tall. The population numbers around 1,500 which puts them firmly in the endangered category.

Divers will also enjoy the spectacle of large hawksbill turtles and sea life off the coast of Sipadan Island.

One of the most captivating experiences to enjoy during a visit to Borneo, is a trip to the island’s jungles. The Borneo Rainforest Lodge in Sabah is an ideal place to stay and is nestled alongside the Danum River’s conservation area. There are 30 individual chalets from which to explore the Lowland Rainforest. The premium chalets include an outdoor hot tub attached to a large decking area which provides spectacular views of the forest’s beauty.

On a guided tour of the area you might expect to see saltwater crocodiles, proboscis monkeys and bearded pigs. You will also be amazed by the noise levels during a jungle expedition. Listen out for barking lizards, screeching gibbons and songs from some of the 340 species of birds in the forest.

Borneo is home to a number of indigenous island tribes who live in harmony with the forest and pride themselves on their ability to use its resources sustainably. Perhaps the most famous tribe is the Dayak people who previously were known as ‘headhunters’ until the grisly activity was outlawed in the late 19th century. A chance to meet the Dayak or people from neighbouring Kelabit or Penan tribes is one of the most interesting things you can do on the island.

Borneo is located close to the Equator and enjoys a tropical climate. Perhaps the best time to visit is between March and October when the island is typically at its driest, so it’s not too late to book for 2016. Don’t forget to take out some annual travel insurance for peace of mind that you will enjoy the trip of a lifetime. Make sure to check your policies terms and conditions before taking part in any activities.