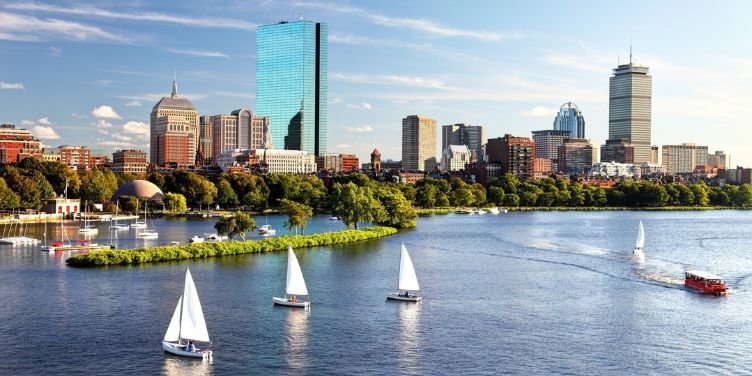 There’s a lot to see and explore in Boston, so I’ve picked out highlights for a short city break to give you a feel for what Boston has to offer…

Marked by a line of red bricks set in the sidewalk, the Freedom Trail connects 16 sites of historical significance to the birth and growth of the United States.

The trail includes the Patriot Paul Revere’s House, the Old South Meeting House, the warship USS Constitution, the Site of the Boston Massacre and a monument to the Battle of Bunker Hill. This final site is where the first battle in the American Revolutionary War took place.

Oddly, the Boston Tea Party does not feature on the Freedom Trail. But there is a museum and two replica ships commemorating the event. Reenactments are staged and there are interactive displays along with two of the original tea chests that were thrown into the harbour.

For a break from the hectic city, head for the Public Gardens. You can wander among the flower beds and admire the multitude of statues. These include the ever-popular bronze statue Make Way for Ducklings and Rudyard Kipling’s Jungle Book character Bagheera. The biggest attractions are the ponds and the ornamental swan boats.

Originally, Faneuil Hall was a marketplace and meeting hall. It soon became overcrowded and three further buildings were built, where it became known collectively as Quincy Market. Today you will find shops and boutiques, eateries, pushcarts and street performers in and around the buildings. This is the place to head to for some retail therapy.

Quincy Market, with all its eateries, is close to the Waterfront and its numerous seafood restaurants.

Both places are popular with Bostonians and visitors alike. Not far from the Waterfront and the market is the famous Union Oyster House. It’s the oldest continuously operating restaurant in the USA, having opened in 1826. It was popular with John F Kennedy when he was a student.

The North End was once a fashionable area of Boston.

In the 1930s, many Italians begin to settle in the area and so the area became known as ‘Little Italy.’

Today, the area is known for its Italian restaurants and bakeries. The best way to experience the area is to take a tour with a knowledgeable guide.

Apart from food, the other Bostonian passion is sport, in particular that played by men in red socks. The local baseball team, the Boston Red Sox, have their home at Fenway Park. You can book a tour of the ground and follow it by watching a game.

The city’s other famous orchestra, the Boston Pops, specialises in light classical music and musical theatre.

A series of wharves lined with walkways, marinas, hotels and seafood eateries make up what has become known as the Waterfront. The New England Aquarium, with a giant ocean tank and IMAX cinema, are always popular with families, as is the Boston Children’s Museum with its fun, hands-on exhibits.

Boston is often overshadowed by its East Coast neighbours but has much more to offer historically and culturally. Without Boston and its revolutionaries there would be no Fourth of July, coffee sales would be much lower and Fenway Park would be home to the American cricket team.