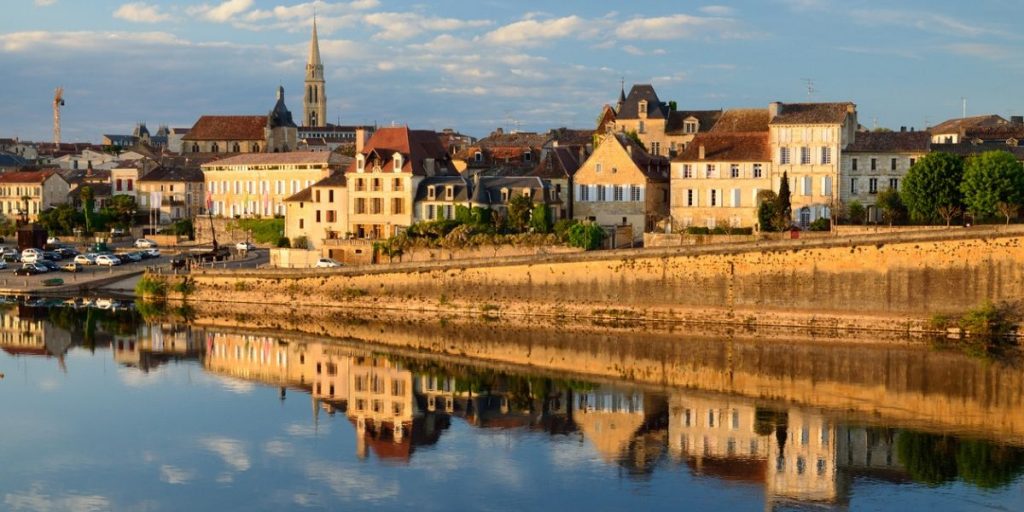 We thought it might be an idea to look at some ‘different’ destinations to travel to on a budget airline like Ryanair or Easyjet. We will check out a new destination each time and write up a feature for you. Destinations will be different from the usual suspects and will offer you an alternative for a city break or a holiday. Next stop: France.

Bergerac is a 2½  hour flight from the UK and is situated in South-West France in the Périgord Dordogne region.  Served by airports at Bergerac or Bordeaux, Bergerac also has an SNCF station and can be reached by train from the UK.   Car hire is recommended as this is a vast region with a relatively small public transport network.

A very traditional French market town, it has a population of almost 28,000 people.   The best time to go is either in the midst of Summer (if you like the heat) or September for a quieter and cooler break.

Bergerac (famous for Cyrano de Bergerac) has a rich history.  Its origins date back to the castle built at the end of the tenth century, located on the banks of the Dordogne river.   The town quickly grew from 1200 to house travellers, pilgrims and merchants. The construction of the church of Saint-Jacques and the hospital supported the new inhabitants.

In the thirteenth century, the development of trade afforded the creation of a bridge over the river Dordogne.  The city developed to acquire ‘liberties’ and franchises for a growing wine export business. The town quickly overflowed and extended to the suburbs where the many monasteries were built.  In the fourteenth century, the city was invoved in the Anglo-French conflict, however it maintained status as a free and independent city.   After a demographic recovery (fifteenth century), the municipal authorities worked to restructure urban life and regenerate public health as well as education.  With peace came prosperity, and the peaceful market town became a powerful stronghold despite some convents and churches having been destroyed.  The town’s new wealth gave rise to beautiful architectural programs, including the’Peyrarède’ in 1604.   This great period of independence ended under the reign of  Louis XIII.

Things to see and do:

Castles or ‘Châteaux’ are a must see in this region.  If you don’t have time to see them all make sure you visit at least one, but do take extremely comfortable shoes to wear (with non-slip soles).

Château De Lanquais:   Château De Lanquais is a magnificent Renaissance palace complete with its own fortified castle that was constructed by the builders of the Louvre in Paris. Fully furnished, the château is open to the public.

Château De Monbazillac: Having remained almost exactly as it was in the 16th century, the Château de Monbazillac is easily reached from Bergerac – about six kilometres away.

Wine lovers will be in heaven in the Bergerac region with fine wines to drink and many places to visit including:

La Maison Des Vins De Bergerac: As the headquarters of the regional wine council, the Maison has exhibits on the history of wine produced in the region, along with vintages to purchase. It is housed in a striking 17th century former monastery.

Wine and Inland Waterways Transport Museum: This museum celebrates the important role that the Dordogne river played in the success of the region’s wine industry. Exhibits include barges and boats.

Other notable attractions include:

Musée Du Tabac: The Bergerac Tobacco Museum, housed in Pyrarède House, a turreted building in old Bergerac, has five main exhibitions areas on the discovery of tobacco, its social history, painting, craftsmanship and the city’s connections.

Boat trips on Dordogne river: Following in Cyrano’s footsteps, go discover the riverside on traditional “gabarres” (flat bottomed boats). You can learn about the “gabarriers” hard life, and Bergerac’s rich history. This relaxing boat trip lasts one hour. You will go through a natural bird sanctuary where, depending on the season, you will be able to photograph herons, kites, kingfishers, etc.

Moulin de la Rouzique – Economusée du Papier: This fascinating museum, a short drive away in Couze, has exhibitions of the area’s paper-making past, along with rare documents and examples of watermarks.