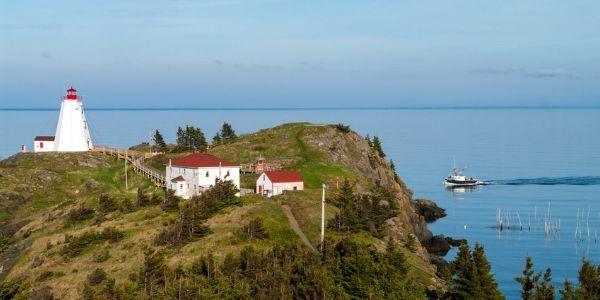 As of 19 July, fully vaccinated travellers can now go on holiday to amber list countries from the UK without needing to self-isolate or quarantine on return. Make sure you check the FCDO’s travel advice before you set off and while you’re away.

New Brunswick may be less well known than many of Canada’s other provinces but it’s an undiscovered treasure trove for the perceptive traveller.

Here are my recommendations for a visit to New Brunswick…

Most people know Canada is bi-lingual. In Quebec, they speak French and in most of the rest of the provinces, they speak English.

What many don’t know is only one province, New Brunswick, is truly bi-lingual, as both languages have equal status.

New Brunswick is one of the eastern Maritime Provinces of Canada. To the south, is the Bay of Fundy and to the east is the Gulf of St Laurence and the Atlantic Ocean.

Fredericton is the province’s capital and has a historic centre dating back to when the British were garrisoned here during the 18th and 19th centuries.

On the banks of the St. John River is the Lord Beaverbrook Art Gallery, a gift to the town by the New Brunswick born press baron. The museum contains original works by Turner, Dali, Constable and Gainsborough as well as works by notable Canadian artists.
Boyce’s farmer’s market is a great place to have breakfast, buy some local produce and people-watch. The market has stalls selling German sausages, French cheeses and British marmalade reflecting its European heritage alongside Canadian favourites like maple syrup.

Fredericton is home to one of Canada’s premier music festivals, the Harvest Jazz and Blues Festival (see below).

When people talk about Miramichi in New Brunswick they could, confusingly, be referring to either the river, town or region. The valley is a prime location for excellent fishing and has an enviable reputation with anglers. A disused railway line now serves as a cycle track and hiking trail along the valley. The best way to see the area is to hire a canoe and paddle down the river. Drifting quietly along gives you the chance to see bald eagles, deer and bears.

Another way to see bears up close is to go on a bear watching tour. Perched in a comfortable hide among the trees you can watch the bears as they come to forage in the late afternoon and early evening.

Around Miramichi, there is a distinct change in culture. Bakeries become boulangeries; cheese becomes fromage; the flags (or drapeau) look remarkably like the French tricolour. This is Acadian territory. Descendants of French settlers in New England were repeatedly dispossessed until they ended up in north-east New Brunswick on land no one wanted. The Acadian Historic Village gives a real insight into the lives of the Acadian people then and now.

A scenic drive along New Brunswick’s North Shore and over a string of islands takes you through salt marshes and picturesque harbours. It is a great way to get a feel for the area. At the tip of the peninsula, miles of boardwalks over isolated dunes take you over the wild windswept landscape, typical of the North Shore.

The Bay of Fundy

The Bay of Fundy has the highest tides in the world; 15 metres (51 feet) between high and low tides. At the Hopewell Rocks, you can walk on the seabed and six hours later kayak 15 metres above where you were standing. The sandstone rocks themselves are shaped by the sea into weird and wonderful shapes.

There’s so much more to do along the Fundy Coast of New Brunswick. You can visit the Fundy National Park, walk or cycle the Fundy Trail Parkway, visit the bayside towns of St John and Alma, stop by the appropriately named Cape Enrage or kayak around St Andrew and Deer Island. There are also the Reversing Rapids to visit; an oddity of nature these rapids flow in one direction at low tide and in the reverse direction at high tide.

The wooden lighthouses of New Brunswick

Although not a destination, there are enough to make searching for the wooden lighthouses an experience in itself. There are numerous wooden lighthouses along both of New Brunswick’s coasts. There’s also one in Fredericton on the bend of the river. Some can be visited, others are just great places for a photograph in a wild and desolate place. My top favourites are the one at Miscou Island on the tip of the Acadian Peninsula and the one at Cape Enrage on the Fundy Coast.

My favourite New Brunswick experience is the Harvest Jazz and Blues Festival, which is devoted to jazz and blues in Fredericton.

It is world renown and attracts many international artists. For a few days in September, jazz and blues musicians take over the town. They perform in the streets and venues all over town with music that is both traditional and experimental. It is a fabulous way to start or end a tour of New Brunswick. For more information and this year’s dates visit http://www.harvestjazzandblues.com

Getting to New Brunswick

Flights from the UK to New Brunswick airports are indirect with changes in Halifax or Toronto being most common.
To fully cover your flights, you’ll need to choose a travel insurance policy that has connecting flight cover. This may come at an additional cost but will then cover your entire journey, while giving you reassurance.