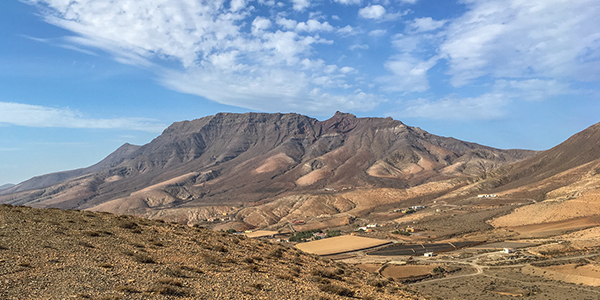 As I left the plane a fellow passenger said that I would either love or hate my forthcoming walking experience on the island of Fuerteventura. My curiosity was heightened.

I had read the descriptions of the walks in the programme and they seemed pretty ordinary.  I was soon to discover there is nothing ordinary about the oldest volcanic island in the Canary Islands. Our first walk was a good introduction to the volcanic landscape.  After starting our walk outside the small village of La Oliva we climbed a small hill and looked back on a flat, barren landscape.  The village was a cluster of small white buildings in the distance.  The only shadows cast on the ground came from clouds in the blue sky above us.

On our way to start our second walk we stopped at Morro Veloso to admire two huge bronze statues of Ayose and Guise, past kings of Fuerteventura when the island was divided into two kingdoms.

When the Normans conquered the island the two kingdoms were united and its capital was established in Betancuria. We had time to stroll through this old capital, now an interesting historic village, before starting our walk from there.  We walked to Vega de Rio Palmas where we had lunch in the shade of the buildings and trees that surround its main square.

Our picnics comprised of large fresh bread rolls which we filled with a selection of local produce including goat’s cheese, tomatoes and chorizo.  After eating we had the additional treat of coffee in a local café and a visit to the Church of Nuestra Señora de la Peña, which now houses the statue of the island’s patron saint, la Virgen la Peña. 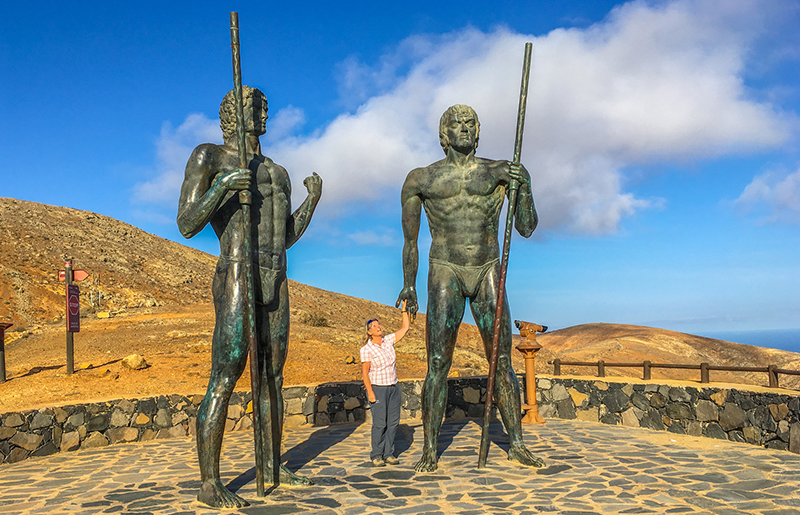 In the afternoon we followed a dried up river bed that led us into the rocky gorge of Barranco de las Peñitas, the oldest landscape on the island. Here we found the tiny Hermitage of la Virgen la Peña.  Every year thousands of islanders, dressed in traditional Canarian costume, make a pilgrimage here to take part in a festival.  This gorge also features a silted-up dam and some pools of water where once the river flowed. 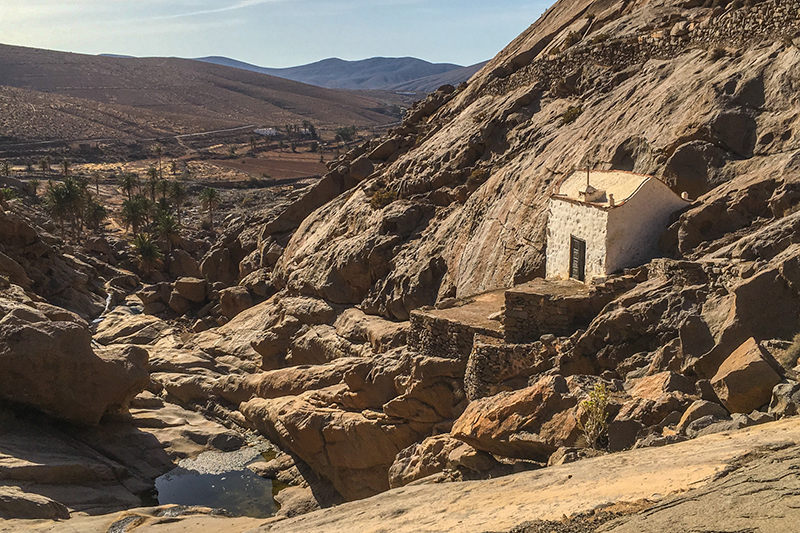 At the end of our walk we were taken to the El Jurado beach. I walked along the black sandy beach and sat behind a wind break fashioned from volcanic rocks.  I was sheltering from both the sun and the wind.  The island is famous for its strong winds which are a feature of its hot summers, keeping the temperature down.

Our third walk took us through the Natural Park of Jandia. This was my favourite walk. As we trekked across sand dunes and then followed a narrow goat track high on a cliff face. Fortunately, there were no goats around but we had seen some earlier nibbling the sparse vegetation.

At the end of the track we scrambled down the cliff face to Cofete Beach, a beautiful sandy beach and completely deserted. It was wonderful relaxing in the shade of the cliffs as we ate our lunch before scrambling back up the cliff to finish our walk. 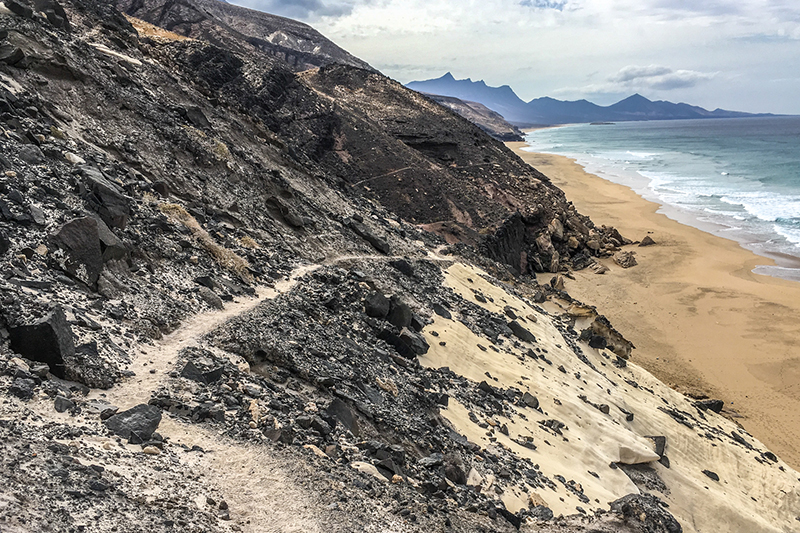 On our last walk we followed the crest trail of El Cuchillo de los Pasos that weaves its way up and down the hills in the Natural Monument of the Knives of Vigán. This protected area offers a good variety of walks to suit all standards as well as sweeping views across the island.  We actually found a tree when it was time for lunch but as it did not have any leaves, the shade it offered was minimal. By then I was used to the sun and just flopped down on the pebbles behind a row of bushes. 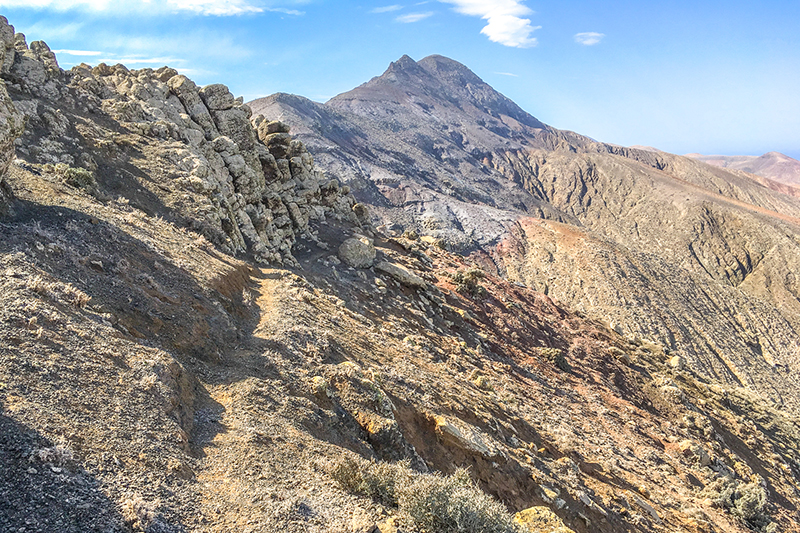 We were based at the far end of the promenade of Caleta del Fuste. It was a twenty-minute walk to the tip of the peninsula at the other end.  Although I could have hired a bike to explore, I chose to walk.  It was an interesting experience.  The sea front by our hotel was fringed by a rocky beach which gave way to a pebble beach, home to some seventeenth century fortifications.

On my way I passed sandy beaches and concrete play areas.  I also found another fortification, the tower of St Bonadventure.  This tower is a fine example of military architecture and was built during the eighteenth century. 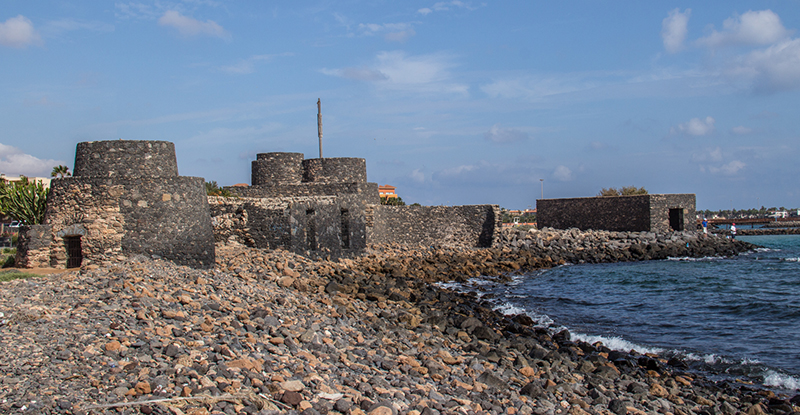 Did I love walking on Fuerteventura? Yes I did. Its natural, unspoilt landscape and wild coastline was something I had never experienced before and I’ll definitely be returning. 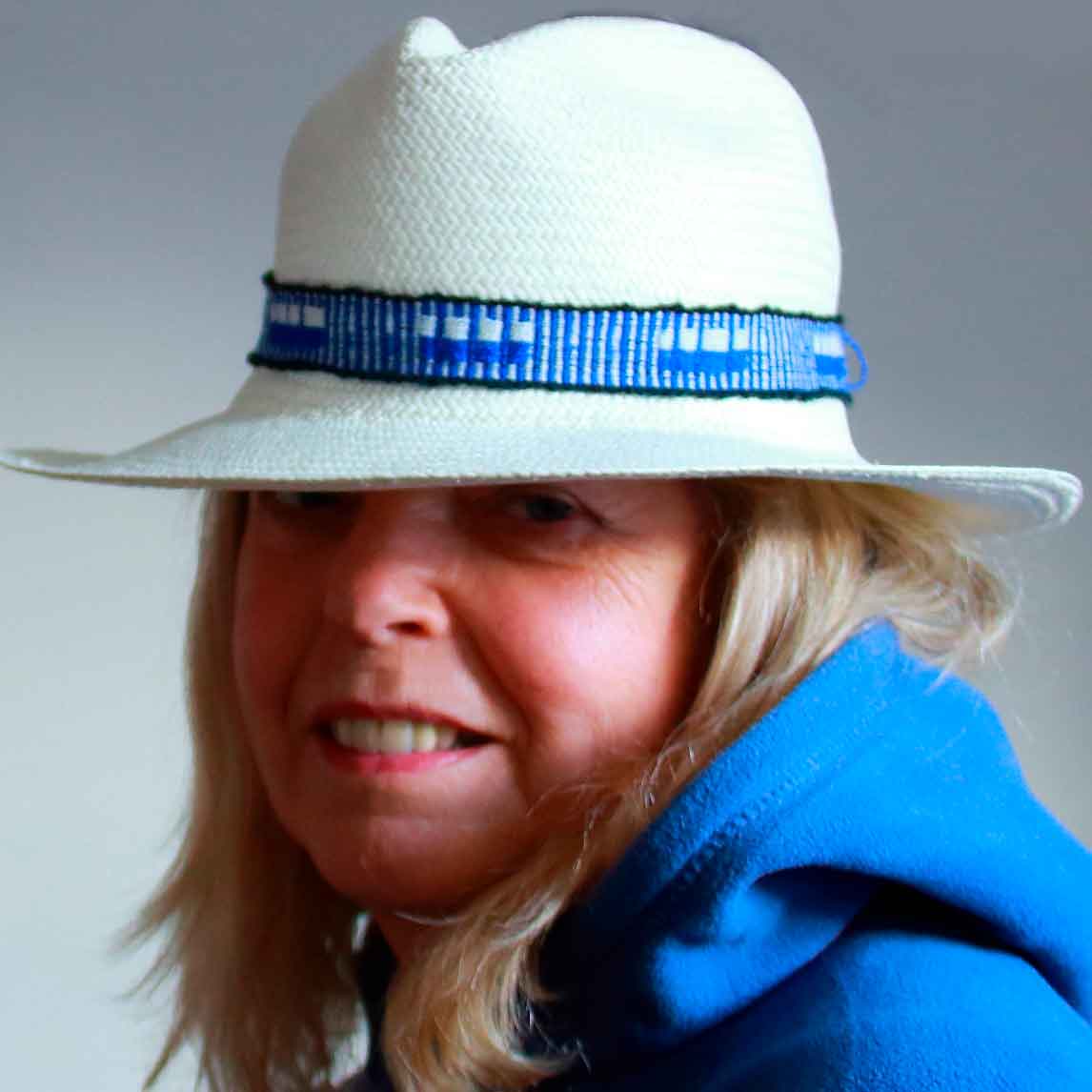